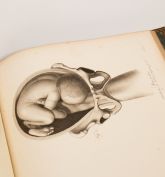 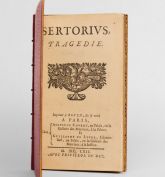 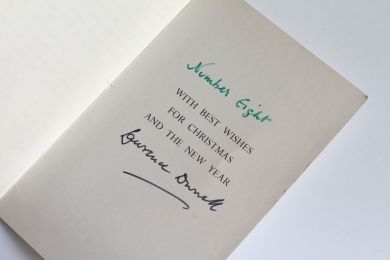 
Autograph greeting card signed by Lawrence Durrell addressed to Jani Brun. The front of the card is illustrated with a reproduction of a pictorial work by Lawrence Durrell, which served as a cover for the album "Songs about Greece" (1964), containing poems by Durrell set to music by Wallace Southam. In the greeting card is a reproduction of the writer's autograph poem "Faustus", as well as his signature in felt.

After many years spent in Greece, Egypt and Rhodes, the travel writer Lawrence Durrell was forced to flee Cyprus following popular uprisings which led to the island's independence from the British crown. Rich only in a shirt and a typewriter but crowned with the success of his novel Bitter Lemons of Cyprus ( Acid lemons) , he arrived in 1956 in France and settled in the Languedoc village of Sommières. In the "Maison Tartès", his large house surrounded by trees, he wrote the second part of his work, his monumental Quintette d'Avignon, devoted himself to painting and received his illustrious friends, including the couple Henry Miller and Anaïs Nin, the violinist Yehudi Menuhin, the London editor Alan G. Thomas, and his two daughters Pénélope and Sappho.
Among the olive trees and under the Mediterranean sun, he met there in the mid-1960s the young and sparkling "Jany" (Janine Brun), Montpellier of thirty years with ravaging beauty, who worked in the Department of Antiquities of the Sorbonne in Paris. It was named “Buttons” in memory of their first meeting, where the girl wore a dress covered with buttons. Henry Miller also fell in love with "Buttons", praising his beauty and his eternal youth in exceptional letters that were never published. The three friends spent memorable Parisian evenings of which we keep precious autograph traces through their correspondence. Recommended by Durrell, she made numerous trips, notably to England, from where she received a large correspondence from the writer as well as original works of art signed by her artist pseudonym, Oscar Epfs.