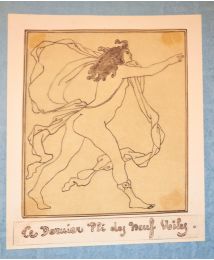 A priceless poetic testament from Marcel Proust's mentor, who lies dormant and out of sight since the death of the author.