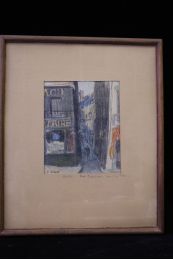 
Original drawing with colored pencils and pastels depicting a view of Nantes.
Edmond Heuzé, pseudonym of Amédée Letrouvé (1884-1967), is a cartoonist, painter, engraver and writer French. For three years, Edmond Heuzé live seventeen various small businesses: the Nénesse brought under the pseudonym "Williams" as a dancer in the troupe of the Moulin Rouge La Goulue, which allows it to go around the world. It also became a merchant, intermediate, hawker, itinerant circus manager, tap dancer at Maxim's, etc. It is in the latter profession he will have the opportunity to paint the circus in his spare time. He married Nina Bacquet, director of the Medrano circus. Refurbished in 1904, he enlisted as a volunteer in 1914 before the outbreak of the First World War, he was curator of the glazes collection of the Grand Duke Nicolas Mikhailovich of Russia. It is incorporated after six unsuccessful attempts as a guard at the clothing store, 22d Infantry Regiment, as André Utter, and drew inspiration for a series of paintings entitled The Masks. In 1918, after various jobs, he became director of Galerie Sagot, rue Laffitte, where he sold paintings by his friends Maurice Utrillo, Suzanne Valadon, Rouault, as well as his. The twelve paintings in the series Masks are sold in the first two days. At that time was the Edmond Heuzé André Utter and Suzanne Valladon best man. He maintained close ties with Maurice Utrillo, Jules Depaquit and Dash-Bognet. Thanks to the generosity of George Cheron dealer, he can start painting. In 1920 he exhibited at the Bernheim-Jeune gallery as well as the gallery Chiron in 1923, and can now live his art he then devoted to portraits, particularly in the circus. In 1938 he won the Prix Paul-Guillaume for the portrait of mime Farina. --- Please note that the translation in english is done automatically, we apologize if the formulas are inaccurate. Contact us for any information!