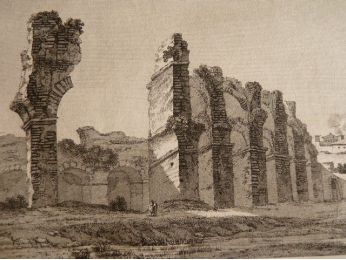 
Original print folio untrimmed extracted Travellers in Lower and Upper Egypt Vivant Denon.Planche composed of two views as described by the author: No.1 view of Ajaccio, a town now famous for being the cradle of a great man; I represented our arrival (see Journal, Volume II, page 341) 2 · N ° view of Frejus, near the Porte d'Aix; I represented when the two frigates that relate Bonaparte in France entered the port of this city; event is history, and it will become by a monument more lasting than the Roman amphitheater which we see the ruins on the front of the estampe.Rousseurs, otherwise good conservation.Publié for the first time in two volumes including an atlas of engravings, Didot, in 1802, the 'Journey to the Lower and Upper Egypt proved so successful that it was translated in 1803 into English and German, and a few years later in Dutch and Italian, for example. Almost all boards are designed by Denon, who also engraved himself a few, including portraits of the inhabitants of Egypt, who still kept the freshness of sketches taken on the spot (our 104-111 ). Two dozen writers have also collaborated to create etchings which Baltard, Galen, Reville and autres.Dominique Vivant Denon Baron says Vivant Denon, born in Givry January 4, 1747 and died in Paris on April 27 1825 is a writer, author, diplomat and French administrator. At the invitation of Bonaparte, he joined the expedition to Egypt in shipping from May 14, 1798 on the frigate "La Juno." Protected by French troops, he had the opportunity to travel the country in all directions in order to gather the material that was the basis for his artistic work and the most important literary. It supports in particular General Desaix in Upper Egypt, which he refers to numerous sketches, ink wash and other drawings in pen, black chalk, or chalk. He draws constantly, usually on his knee, standing or on horseback, and sometimes even under enemy fire. After a journey of 13 months during which he draws thousands of drawings, Vivant Denon returned to France with Bonaparte, and became the first artist to publish the story of the expedition. The 141 boards that accompany his diary retrace its entire journey from the coast of Corsica to the pharaonic monuments of Upper Egypt. Bonaparte then appointed Director General of the Central Museum of the Republic, which became the Napoleon Museum and the Royal Louvre and arts administrator. In 1805, Vivant Denon revival project of the Vendome column, which had been suspended in 1803 then organizes expeditions across Europe to raise imperial works of art which are plundered to be carried away to the Louvre. In 1814, Louis XVIII confirmed as head of the Louvre, one wing of which still bears his name today. It is considered a great precursor of museology, art history and Egyptology. --- Please note that the translation in english is done automatically, we apologize if the formulas are inaccurate. Contact us for any information!