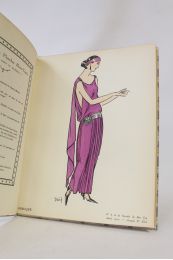 
Set of eight original prints in color, drawn on laid paper. The boards are introduced by a text signed Joan Ramon Fernandez. The sketches XLI, XLIII, XLV and XLVIII are signed David, respectively bottom left and right boards.
Original prints made ??for the illustration of The Gazette fashionable, one of the finest and most influential twentieth century fashion magazines, celebrating the talent of creators and artists French burgeoning art deco.
Famous fashion magazine founded in 1912 by Lucien Vogel, The Gazette fashionable appeared until 1925 with an interruption during the War of 1915 to 1920, due to mobilization of its editor. She is 69 Deliveries from just 2000 copies and is illustrated including 573 color plates and 148 sketches depicting models of fashion designers. Upon publication, these luxury publications "are for bibliophiles and worldly aesthetes" (Françoise Tétart-Vittu "good Gazette of tone" in the fashion dictionary, 2016). Printed on fine laid paper, they use a typeface created specifically for the magazine by Georges Peignot, the Cochin character, taken in 1946 by Christian Dior. The prints are made with the technique of metal stencil, enhanced color and some outlined in gold or palladium.
The adventure began in 1912 when Lucien Vogel, man of the world and fashion - it has already participated in Femina magazine - decided to found with his wife Cosette de Brunhoff (John's sister, the father of Babar) Gazette good tone in which the subtitle is then "Art, fashions and frivolities." Georges Charensol quotes the editor: "In 1910, he observed, there was no truly artistic fashion magazine and representative of the spirit of his time. So I thought of making a glossy magazine with truly modern artists [...] I was certain of success because for any fashion country can compete with France. "(" A great art editor. Lucien Vogel "in literary News, No. 133, May 1925). The success of the magazine is immediate, not only in France but also the US and South America.
Originally, Vogel therefore brings together a group of seven artists: André-Édouard Marty and Pierre Brissaud, followed by Georges Lepape and Dammicourt; and finally his friends from the School of Fine Arts as are George Barbier, Bernard Boutet de Monvel or Charles Martin. Other talents come quickly reach the equipped Guy Arnoux, Léon Bakst, Benito, Boutet de Monvel, Umberto Brunelleschi, Chas Laborde, Jean-Gabriel Domergue, Raoul Dufy, Edward Halouze Alexander Iacovleff, Jean Emile Laboureur Charles Loupot, Charles Martin, Maggie Salcedo. These artists, mostly unknown when Lucien Vogel appealed to them, will eventually become iconic figures and artistic sought. These are the same illustrators who make the drawings advertisements Gazette.
The boards highlight the dresses and sublime seven artists of the time: Lanvin, Doeuillet, Paquin, Poiret, Worth, Vionnet and Doucet. The designers provide for each number of exclusive models. Nevertheless, some of Illustrations contained no real model, but only the idea that the illustrator is done in the fashion of the day.
Gazette fashionable is a milestone in the history of fashion. Combining the aesthetic requirement and plastic unit, it brings together for the first time the great talents of the world of arts, literature and fashion and imposed by this alchemy, a new image of women, slender, independent and bold, also driven by the new generation of designers Coco Chanel, Jean Patou, Rochas Marcel ...
Recovery in 1920 by Condé Montrose Nast, Gazette fashionable modeled for the new composition and the aesthetic choices of the "little dying newspaper" that Nast had bought a few years ago: the Vogue magazine.