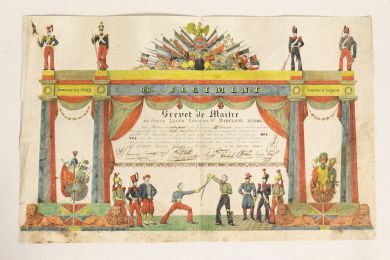 
Master’s Certificate (or Brevet) of sieur Léger, a student of M. Radulphe Pierre
January 1834 | 32 x 50 cm | one leaf
A very nice illustrated certificate in coated watercolors, gum and manuscript, of a master fencer, signed by all the masters of the garrison at Ancona (66th Infantry Regiment) on the occasion of Jean François Victor Léger (a student of Pierre Radulphe) receiving the rank of Master of «Counterpoint» (sabre). «We, the masters of counterpoint in the garrison of Ancona, having examined the abilities of sieur Léger Jean François Victor hereby record our having received him as Master, as a token of which we have issued him with the present Bre
vet for his benefit and to witness what is true and therefore invite our brothers in arms to lend him aid and assistance wherever he shall have earned their esteem and friendship.»
A nice fencing scene in the foreground of the document.
Marginal spotting as well as a few repairs using paper strips to verso.
The town of Ancona, where this certificate was issued, was occupied by French troops from 1832 to 1838, which is to say during the Italian crisis pitting France
against Austria in a battle for influence in the peninsula.
Fencing was widespread during in Empire period when each regiment had its Master of Arms. Optional in the army from 1815 on, it was made obligatory once more in 1824 before becoming optional again in 1834, the year this document was produced. A highly regulated discipline, fencing inspired a number of writers (including Stendhal, Dumas, and others) before becoming an Olympic sport in 1896.