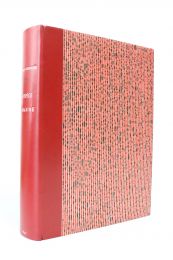 
Edition for which he was not drawn large paper, copy with good coverage.
Binding to bradel half morocco old red, smooth back, when the tail, and contreplats guards lined glossy, wrappers and back preserved and bound in, gilded head, signed binding Goy P. & C. Vilaine.


"There is no human species, there is a human species. This is because we are men like them that the SS will ultimately powerless before us.".

This fundamental work on the experience of Nazi Camps was the third and last publication of the ephemeral publishing house founded by Marguerite Duras and Robert Antelme, her husband from 1940 to 1946.
Unnoticed in this first release confidential, only a few copies were sold, it was put on sale the following year under new covers by Robert Marin, the book suffer the concurrency of the many writings on the subject have appeared immediately after the war. Yet as related by F. Lebelley "at a time when stories abound, the special power of that book, a first sobriety, upsets as a founding text book writer who also took recognizes Duras. , "the wide literature." Robert Antelme never write else. Despite the accolades and honors, the human species will only work of a lifetime. " (in Duras, or the weight of a feather.)
Thanks to the intervention of Albert Camus, the book reappears ten years later in 1957 by Gallimard and then knows wider dissemination.
Therefore, this book is part of literary history as one of the most important writings facing the painful but necessary reflection on the concentration camps and the human condition. It is after him that writers such as Jorge Semprun his friend will start a new approach to writing the impossible camps.
In 1947 Antelme announced in his foreword "just coming back, we reduced our memory with us, our whole living experience and we felt a frantic desire to tell it as it is. And in the early days, however, it seemed impossible to bridge the distance that we found between language and we had this experience [...] How resign ourselves to not try to explain how we had come here? yet we were there. And yet it was impossible. Just start telling us that we were suffocating. To ourselves, what we had to say then we began to seem unimaginable. "

Rare and important issue, absent from most libraries Domestic and international, including the BNF.