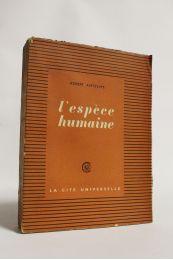 
The first edition, of which there were no large paper copies - this copy with the right covers.
Small tears, not serious, to the margins of covers and to foot and head of spine.
"There are no human beings, there is just humankind. It's because we are people just like them that the SS will be forever powerless before us."
This fundamental work on the experience of the Nazi concentration camps was the third and last book published by the fleeting publishing house established by Marguerite Duras and Robert Antelme, her husband from 1940 to 1946.
This first - unadvertised - appearance of the work sank without trace, selling barely a few copies. It was reissued the following year with a different cover by Robert Marin, but nonetheless suffered stiff competition from a number of other works on the subject that appeared immediately after the war. Nevertheless, as F. Lebelley notes, "at a time when there were many such accounts around, the power of this book - possessed of a singular sobriety - hit you with the force of a seminal text." The book is the work of an author who, according to Duras, "dove right into literature. This was Antelme's only book. Despite the praise and the prizes, L'Espèce humaine will remain the only work he'll ever write" (in: Duras, ou le poids d'une plume). The work was re-published, thanks to Albert Camus' efforts, ten years later (in 1957) by Gallimard and enjoyed a much wider circulation. Since then, the book has entered the history of literature as one of the most important works dealing with the painful necessity of thinking about the concentration camps and the human condition. It was thanks to this book that writers such as Antelme's friend Jorge Semprun could begin a new approach to the impossible task of writing about the camps. From 1947 onwards, Antelme noted in his foreword to the book: "we only just came back, bringing with us our memories, our experience still so fresh, and were filled with a frenetic desire to tell it as it was. But, from the very beginning, it seemed to us impossible to bridge the gap we faced between the words we had and this experience...How to keep ourselves from trying to explain how we'd found ourselves there? We were there still; and yet it proved impossible. Hardly had we begun our account, we found ourselves suffocating. What we had to say started to seem unimaginable then, even to ourselves."

A rare and important copy, not in most national and international libraries, most notably the French National Library.