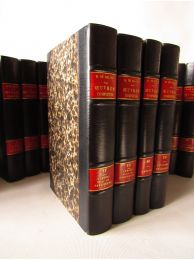 
First collective edition under the title of Œuvres as well as first illustrated edition (Clouzot), including several texts in first edition, including the last part of Splendors and misery of courtesans, the third part of Lost Illusions, David Sechard; The museum of the department, the reverse of contemporary history, etc.
The book was originally intended to contain only 17 volumes, but the publisher Houssiaux, following the previous editors, completed them with the last three volumes which here constitute volumes 18, 19 and 20. However, our copy is mixed and has some notable peculiarities: thus the volume 1 is at the date of 1846, the volume 2 also
Binding half brown shagreen, back with four nerves adorned with three gilded florets, guards and contreplats of paper pebbled to the tank. It is missing the table at the end of volume 11.
The series is illustrated with a set of 151 engravings by Daumier, Gavarni, Nanteuil, Monnier, Johannot etc. out of the 152 listed by Clouzot. Our copy is quite complete of the six figures of Volume 13, which are almost always missing, and the five figures of Volume 17 which are very often absent, having been delivered only later. In addition, Volume 17 is indeed the date of 1848 and not 1849 element which, like the signal Clouzot, is particularly remarkable for its rarity.
The set is broken down as follows:
- Scenes of private life (Tomes 1, 2, 3, 4), containing: The House of the cat-who-pelota, The Ball of Seals, The Stock Exchange, The Vendetta, Madam Firmiani, A Double family, The peace of the household , The False Mistress (first edition), Women's Study, Albert Savarus (first edition) (Volume 1) ; Memoirs of Two Brides and Grooms, Eve's Girl, The Abandoned Woman, The Grenadiere, The Message, Gobseck, Another Woman's Study (first edition) (Volume 2) ; The Woman of Thirty, The Marriage Contract, Beatrix (first part) (Volume 3) ; Beatrix (second and last part), La Grande Breteche (end of other Study of woman), Modeste Mignon, Honorine, A Beginning in life (Volume 4) .
- Scenes from provincial life (volumes 5, 6, 7 and 8), containing: Ursule Mirouet, Eugénie Grandet, The Singles: (first story) Pierrette (Volume 5) ; The Singles: (second story) The Cure of Tours, The Singles: (third story) A Boy's Wedding, The Parisians in Province: (first story) The Illustrious Gaudissart, The Parisians in Province: (second story) The Muse du department (Volume 6) ; Rivalries (first story): The Old Girl - (Second Story: The Cabinet of the Ancient, The Lily in the Valley (Volume 7) , Lost Illusions (first edition of the last part) (Volume 8) .
- Scenes from Parisian life (volumes 9, 10, 11 and 12), containing: History of the Thirteen , composed of Ferragus, The Duchess of Langeais and The Girl with the Golden Eyes and Father Goriot (Volume 9) ; Colonnel Chabert, Facino Cane, The Mass of the Atheist, Sarrasine, The Prohibition, History of the Greatness and Decadence of César Birotteau (Volume 10) ; The Nucingen House, Pierre Grassou, The Secrets of the Princess of Cadignan, The Employees, Splendors and Miseries of the Courtesans (first and second parts) (Volume 11) ; Splendors and Miseries of Courtesans (third part), A Prince of Bohemia, Sketch of a Business Man by Nature (first edition) , Gaudissart II (first edition) , The Comedians without knowing it (first edition) [follow-up of] Scenes from Political Life , containing: An Episode in Terror, A Dark Deal, Z. Marcas , The Downside of Contemporary History (first episode) (first edition).
- Scenes of military life (Volume 13), containing: Chouans and A Passion in the desert
- Scenes of the country life (Volume 13), containing: The Country Doctor and The village priest
- Philosophical Studies (Tomes 14, 15 and 16), containing: The Skin of shagreen, Jesus Christ in Flanders, Melmoth reconciled, The Unknown Masterpiece, The Search for the Absolute (Volume 14) ; Massimilla Doni, Gambara, The Cursed Child, The Marana, Farewell, The Requisitioner, El Verdugo, A Drama by the Sea, The Red Inn, The Elixir of Long Life, Master Cornelius, On Catherine de Medici: Introduction and Part One - The Calvinist Martyr (Volume 15) ; Catherine de Medici (second part), The Proscribed, Louis Lambert, Seraphita [followed by] Analytical Studies , containing: Physiology of Marriage (Volume 16) .
- Scenes from Parisian life, continuation (Tomes 17 and 18), containing: Cousin Bette, cousin Pons (Tome 17); Splendors and Miseries of Courtesans (Part Four) [followed by] Scenes from Political Life , containing: The Back of Contemporary History (Second Episode) [followed by] Scenes of Country Life , Containing: The Peasants [Followed] of] Analytical studies , containing: Small miseries of the married life (Volume 18).
- Theater (Volume 19), containing: Vautrin, The Resources of Quinola, Pamela Giraud, The Maratre .
- Funny Tales (Volume 20): First Tenth, Second Tenth, Third Tenth .

Very nice set of complete works, in the famous first edition Furne who has the great interest to publish in first edition several texts of Balzac.