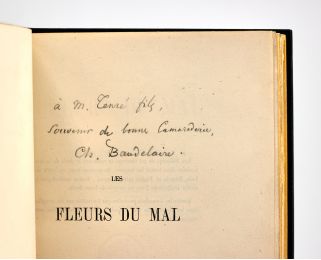 First edition, printed on vélin d'Angoulême paper, with the usual misprints and including the six condemned poems, one of the few copies given to the author and “intended for friends who do not deliver literary services”.
Full emerald morocco binding, Jansenist spine in four compartments, paste down lined with garnet morocco framed with a gilt fillet, gilt silk endpapers stitched with Japanese-style flower motifs, the following in marbled paper, wrappers of the third issue (with two marginal restorations to the second board) and spine preserved, all gilt over untrimmed edges, marbled paper slipcase lined in morocco. Binding signed by Marius Michel.

Precious presentation copy inscribed and signed by the author in pencil on the half-title page: “à M. Tenré fils, souvenir de bonne camaraderie, Ch. Baudelaire” (“to M. Tenré Jnr, a reminder of good friendship, Ch. Baudelaire”) and three handwritten corrections, in pencil on pages 29 and 110 and in ink on page 43.

Exceptional inscription to a childhood friend, banker and intellectual, one of the rare contemporary inscriptions that were not motivated by judicial necessity or editorial interests.
Indeed, even the few examples on Holland paper were largely devoted to strategic gifts in order to counter or reduce the wrath of justice that, in June 1857, had not yet returned its decision. Poulet-Malassis will hold a bitter memory of it: “Baudelaire got his hands on all thick paper copies and addressed them to more or less influential people as a means of corruption. Since they have not got him out of trouble, I believe he would do well to ask for them back.”
Baudelaire's correspondence makes it possible to define quite precisely the different types of inscriptions the poet made on the publication of his collection. He himself sent a list to de Broise to mention those to whom the press deliveries were dedicated, mainly possible judicial intercessors and influential literary critics. The poet then requires “twenty-five [copies] on ordinary paper, intended for friends who do not deliver literary services.” A letter to his mother tells us that he only got twenty. Some of them were sent in June 1857 to his friends, including one for Louis-Ludovic Tenré. Others were saved by the poet or offered late like the ones for Achille Bourdilliat and Jules de Saint-Félix.

If Tenré, this childhood friend whom Baudelaire has just found again in December 1856, is honored with one of the poet's rare personal copies of the Fleurs du mal publication, the three misprints he immediately noticed having been carefully corrected by hand, it is not on account of a service delivered or in anticipation of an immediate benefit. However, as always with Baudelaire, neither did he send his masterpiece to his boarding companion from Louis-le-Grand school as a simple “reminder of good friendship.”
As early as 1848, Louis-Ludovic Tenré took over from his father, the publisher Louis Tenré, who, like other major publishers, moved into investment, providing loans and discounts exclusively for those in the book industry. These bookseller-bankers played a key role in the fragile publishing economy and contributed to the extreme diversity of literary production in the nineteenth century, supporting the activities of small but bold publishers and liquidating other major judicial clashes.
In December 1856, Baudelaire tells Poulet-Malassis that he had deposited an expired banknote with this “old school mate,” which Tenré, out of friendship, agreed to accept. It was the initial advance for “the printing of one thousand copies [of a collection] of verses entitled Les Fleurs du Mal.” With this copy hot off the presses, Baudelaire then offers Tenré the precious result of the work discounted by his new banker. It is the beginning of a long financial relationship. Amongst all of Baudelaire's discounters, Louis-Ludovic Tenré will be the poet's favorite and the only one to whom an autographed work will be sent.
Nicolas Stokopf, in his work Les Patrons du Second Empire, banquiers et financiers parisiens, dedicates a chapter to Louis-Ludovic Tenré and evokes the privileged relationship between the poet and this unusual and scholarly financier, Paraguay consul and Latin America specialist, also the author of a significant work, Les états américains, published for the 1867 Exposition Universelle, of which he was a commissioner.

Even the poet's countless financial hazards will never cause lasting damage to their agreement. The trust this publisher's son he puts in Baudelaire is down to Tenré's interest in literature, as is evidenced by this excellently preserved copy given to him by Baudelaire. Quoted many times in his correspondence, and in his “carnet” – a kind of poetic diary written between 1861 and 1863 – Louis-Ludovic Tenré quickly became the main financial interlocutor for the poet whose life is, nevertheless, affected by the fear of his creditors.
“There is an astounding incoherence between Baudelaire's blinding intelligence and the chaos of his material life. He spends his time in his correspondence chasing money, his letters are almost exclusively about that. He is incapable of managing a budget of 200 francs per month and is in debt everywhere, even though he is not entitled to it, since he is under guardianship. Worse still: his annuity serves him only to pay the interest on the loans he takes out at very high rates. It is a vicious circle: he himself digs his own financial black hole.” (Baudelaire, Marie-Christine Natta).

This work's utmost importance in the history of literature, well beyond French literature, as well as the particular history of its publication, have contributed to the early interest in the first edition and even more so for the rare copies given out by the author.

In 1860, during the auction of all of Custine's property, who died in August 1857, the poems of a salacious poet dedicated to a writer of poor moral standards were little appreciated. However, by 1865, Baudelaire himself states that “for two years we have been asking everywhere [Les Fleurs du Mal], and in sales, they make quite a lot”. And by 1873 and 1874, the Gautier and Daumier library sales mention their precious copies and “the handwritten ex-dono” with which they are adorned.

Since then, the inscribed copies have been described and referenced, which has enabled bibliographers to count and allocate 55 copies of the first edition of Fleurs du Mal that were handed out by Baudelaire. Amongst them, some have been destroyed (like Mérimée's copy, during a fire at his home), others are only mentioned in the correspondence of the person to whom they are dedicated, but were never known (particularly the copies given to Flaubert, Deschamps, Custine and Molènes), several of them only made a brief appearance in the nineteenth century before disappearing (amongst which we include the copies of Honoré Daumier, Louis Ulbach and Champfleury). Finally, some major international institutions, libraries and museums acquired them very early on for their collections (including those of Saint-Victor, Le Maréchal, Nadar, Pincebourde, etc.).

Since the Second World War, only thirty or so copies of Fleurs du Mal featuring an inscription by Baudelaire have appeared in libraries, on public sale or in bookshop catalogs, each time being subject to specific attention from all of the professionals, international institutions and bibliophiles that have been informed.

Perfectly set, with its wrappers, in a Jansenist binding by one of the major bookbinders of the end of the 19th century, Louis-Ludovic Tenré's very beautiful copy, one of twenty reserved for the author, enriched with precious handwritten corrections and given by Baudelaire on publication, appears as a remarkable witness to the specific conditions under which this legendary work was published.