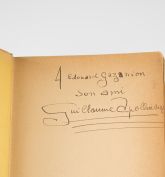 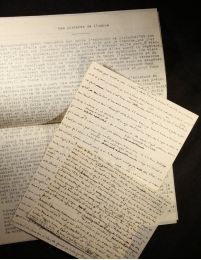 
Autograph manuscript of the author of 2 and a half pages in-8 published in the issue dated 10 December 1943 of the Journal of Debates. Complete manuscript writing very dense, with many erasures, corrections and additions. Literary review published on the occasion of the publication of Passage man Marius Grout, Prix Goncourt 1943. Complete typescript is attached.
Criticism of Blanchot for future Prix Goncourt is not tender, although he fully grasp the issues. This story whose tragic board ends with a creative deception of a new faith, for Blanchot contains a moral ambiguity.
"We understand what Marius Grout seeks to show; that men can not live without a dream of transcendence, the miracle did not need truth [...] But [...] if people need to live an ideal that is a fable, the question arises whether after all men need to live. "The question is rhetorical for a modern novel, but in 1943," the writer who agrees to deal with issues where the destiny of man is at stake [...] gets himself involved, he formatting; loses if he loses himself. "
Between April 1941 and August 1944, Maurice Blanchot published in the "Chronicle of the intellectual life" of the Journal of Debates 173 articles on recently published books. In a half-page newspaper (about seven pages in-8), the young author of "Thomas the Obscure" his first steps in the field of literary criticism and inaugurates a theoretical work that develop later Many in these essays, "The Share of fire" to "The Infinite Conversation" and "The Writing disaster." From the very first articles, Blanchot demonstrates a sharp analysis far beyond the current literature that motivates writing. Oscillating between classical and modern writers of the first order and minor novelists, he puts in his columns, the foundations of critical thinking which will mark the second half of the twentieth. Transformed by writing and by war, Blanchot breaks, over a thought exerted "on behalf of the other," with violent maurassiennes certainties of his youth. Not without paradox, then it transforms literary criticism philosophical act of intellectual resistance to barbarism at the heart of an "openly marechalist" newspaper: "Burning a book, write, are the two acts between culture which registered its oscillations opposites "(The Book, In Journal of Debates, January 20, 1943). In 2007, Cahiers de la NRF together under the direction of Christophe Bident all literary chronic unpublished volumes with critical analysis of the relevant work of Blanchot "novels, poems, essays give rise to a singular reflection, always safer his own rhetoric, delivered more to echo the impossible or the lure of extinction. (...) Not without contradictions or step aside, and the certainty of a feverish work begins (... ) these articles reveal the genealogy of a critic who has transformed during the chronicle necessity of thought. " (C. Bident). The autograph manuscripts of Maurice Blanchot are of great rarity. --- Please note that the translation in english is done automatically, we apologize if the formulas are inaccurate. Contact us for any information!