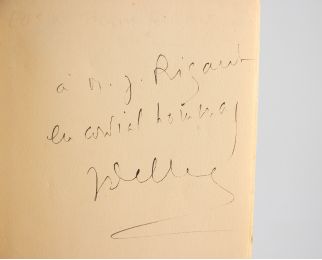 
First edition, one of the review copies service.
Back slightly insolated as generally.
Precious and very rare autograph signed by Joseph Delteil to Jacques Rigaut: "... to MJ Rigaut / cordial tribute / J. Delteil".
Superb dedication, at the crossroads of "isms": while Delteil is just enthralled surreal by the "pope" André Breton in his Manifesto that ranks among those who have made "act of absolute surrealism", Rigaut, for his part is definitely moving away from Dadaism following his friend Tzara.
An emblematic figure of the literary genius consumed by drugs and despair, Jacques Rigaut did not publish anything during his lifetime (except contributions to literary journals). However, he fascinated his contemporaries, including Desnos, Soupault, Tzara, Breton and of course his friend Drieu La Rochelle, to whom he inspired several writings including The Empty Suitcase and The Wild Fire which recounts the last days of a convicted suicide.
In his Dictionary of Dadaism, Georges Hugnet will draw a very beautiful portrait of the poet:
" French writer. At the extreme edge of the mind, this rare writer, modern by obligation and essentially ageless, embodies both the evil of the century and the torment of well-born hearts. Seduced by the reversal of values proposed by Dada, he engages in movement with the warmth and disdain that characterizes disinterestedness. From 1920 to 1922, we find his name in Literature (...). His various writings, considerations of a general nature, or simple reflections of current events, contribute to a deep uneasiness in which the vices of time, the moral sense, and the attraction of death intermingle. A character is born, Lord Patchogue. He goes to the United States, comes back, writes, and publishes nothing. His irony, even to his cynicism, his nonchalance, conceals a despair that leads him to suicide in 1929. Some friends collect, after his death, some autobiographical pages unpublished under the title Posthumous Papers published in 1934 ".

Exceptional testimony to the artistic and literary effervescence of the inter-war contemporary and one of the rare vestiges of the library of the mythical writer Jacques Rigaut: "Try if you can, to stop a man who travels with the suicide in his buttonhole. "