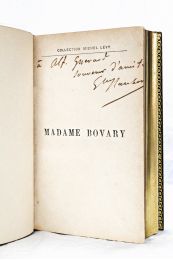 
Madame Bovary
Michel Lévy frères, Paris 1857, 10,5 x 17 cm, 2 volumes bound in 1, contemporary full shagreen
First edition.
Elegant contemporary purple shagreen (uncommon according to Clouzot), spine in five compartments with gilt fillets and triple blind-ruled compartments, blindstamped fillets to head- and tail-pieces and edges of covers, quintuple gilt fillet frame and large blindruled fillet to covers, gilt dentelle frame to pastedowns, cream moirée silk endpapers and pastedowns, a little light spotting to endpapers and pastedowns, all edges gilt, ex-libris to one pastedown, light dampstain to foot of first few leaves.
A very rare autograph inscription signed by Gustave Flaubert to Alfred Guérard, a close friend of Louis Bouilhet, who is the dedicatee of the work: “à Alf. Guérard souvenir d'amitié. Gustave Flaubert” [to Alf. Guérard, a friendly souvenir].
The final letters of the word “amitié” and Flaubert's name shaved by the binder.
Autograph inscriptions by Flaubert are very rare on copies of Madame Bovary (cf. Clouzot).
Alfred Guérard was, with Gustave Flaubert, one of the closest friends of Louis Bouilhet, and an important industrialist in Rouen, who was also a friend of the arts and a true patron of Bouilhet, who had dedicated several works to him. Flaubert, as his correspondence also tells us, always invited him to his literary or artistic dinners. He was, most notably, one of the very few people to hear, in 1863, the abortive féerie, the Château des cœurs, which only got as far as a “solemn reading before a learned council” that Flaubert assembled from among his society friends. “We wanted to have a bourgeois audience to judge the naive effect of the work” (see his letters to his niece Caroline in December 1863).
A very good copy with an autograph inscription, in a handsome contemporary binding.