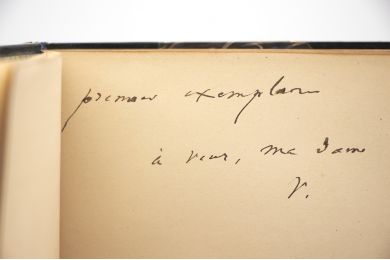 
HUGO Victor
La Pitié suprême [The Supreme Compassion] Calmann Lévy, Paris 1879, 150 x 240 mm (5 15/16 x 9 7/16 ”), half shagreen
First edition.
Elegant half dark blue shagreen over marbled paper boards by René Aussourd, spine in four compartments with gilt dots and double gilt compartments containing horizontal arabesques and gilt stars, date and “ex. de J. Drouet” in gilt to foot, marbled endpapers and pastedowns, covers and spine preserved (marginal repairs to covers), top edge gilt, ex-libris of Pierre Duché on one endpaper.
An exceptional autograph inscription from Victor Hugo to Juliette Drouet, the love of his life: “The first copy for you, my lady. V.”
Written in 1857, this long philosophical poem on the Revolution was originally meant to conclude the Légende des Siècles. Victor Hugo eventually published it in 1879 when he took a stand on behalf of the Communards.
Pleading for the abolition of the death penalty, La Pitié suprême highlights one of the first and most heartfelt of Hugo's political struggles, which he carried on till the very end of his 80s: “if my name stands for anything in these deadly times in which we live, it stands for Amnesty” (Letter to the citizens of Lyon, 1873).
Comparing Hugo and Machiavelli, J. C. Fizaine underlines the intellectual rigor of the poet who put himself at the service of a humanism elevated into a universal principle: “Machiavelli writes for those who wanted to become princes. Hugo writes, first and foremost, for the people, who have known tyranny. It is La Pitié suprême that defines what will remain immutably sacrosanct, human life, without hate, resentment and the memory of past suffering being justifications for the transgression of its sanctity; and the danger of such transgression is the impossibility of establishing any kind of political system and falling back into a pre-civilized state.” (Victor Hugo penseur de la laïcité – Le clerc, le prêtre et le citoyen)
It was together with Juliette Drouet that he waged this final struggle. Published in February 1879, not long after they had settled in the avenue d'Eylau, La Pitié suprême seems to be a political echo of the newfound legitimacy of the two old lovers after fifty years of clandestine relations. Hugo's last fight for amnesty and pardon reverberated in his emotional life, like with the poem he wrote on the death of Juliette in 1883:
“On my grave they'll write, as a great victory,
The cherished, deep, embattled memory
of a love that was not sanctioned but grew virtuous...”
A fine copy in a handsome binding and with an extraordinary provenance, the most desirable one could wish for.