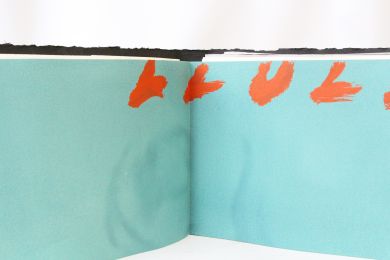 
TàPIES Antoni & LLULL Ramon
LLull-Tàpies Daniel Lelong & Carles Taché, Barcelona 1985, 360 x 500 mm (14 3/16 x 19 11/16 ”), loose leaves, custom box
The very rare first edition of the most important livre d'artiste executed by Antoni Tàpies.
One of 120 numbered copies on vélin d'Arche paper, justified by the artist by hand on the colophon, with 25 original engravings, two signed and justified in pencil by Antoni Tapiès; the only printing after 45 leading copies with a monotype. This copy retains its offprint of the text in French.
Moving autograph inscription signed by Antoni Tapiès with a pencil drawing from the artist's hand – literally! – on which is superimposed a heart, to his close friend and the greatest expert on his work, the writer and essayist Georges Raillard.
Raymond Lull, a 13th century Catalan philosopher and poet, considered the first great Catalan writer, had a major influence on the thinking and work of Antoni Tàpies, who had a number of old and significant works by the mystical thinker in his library. It was in 1973 that Tàpies decided to undertake this monumental work, which he only finished in 1985; it is, at the same time, an homage to a fellow-countryman by a spiritual heir and an examination of their shared metaphysical explorations. This affinity across the centuries between a contemporary artist and a mediaeval writer gives this work – created over 10 years – a particular place within Tàpies' œuvre.
The Catalan artist wanted, in this way, to create a “livre d'artiste” in the fullest sense of the term, starting with the encounter between the book and the object as an aid to literary thinking, by exploiting the full range of expression of the concept of plasticity: line, color, material, and relief, down to the very “size” of the leaves.
More than just a juxtaposition of text and image, Tàpies here establishes a true graphic and written dialogue between the “ravaged clarity” of his work and the “occult wisdom” of Mad Raymond, as Pere Gimeferrer notes in his introduction.
“The meeting of these two worlds – the verbal and the plastic – will allow us to see their revelatory similarities. It is a dialogue between two voices, torches in the sparse and distant silence.”