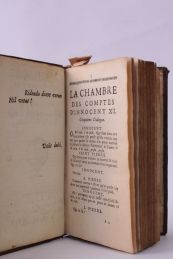 
first editions. Editions elzéviriennes the Sphere. Full contemporary calf, spine tooled raised. Book consists of 5 texts in the first edition together in one volume: The Chamber of Accounts of Innocent XI (5 ° dialogue), The Dream of Pasquin or prom Europe (2 dialogue), The Feast of Guillemot '4 No dialogue), Stone political button, the Diet of Augsburg (9th dialogue). Dialogues appeared anonymously between "1688 and 1691 are pasquinades satirical dialogues between two characters arlequinesques Pasquin and Marsorio. Pasquin is leading the subject, his sidekick asking questions. The whole is treated with due lightness, easily read, the humor and satire are often irresistible. These dialogues were published separately, and each contain a title page, with a publisher often fanciful name and a different city, it goes without saying that there is only one editor really. It was published 19 dialogues, it is naturally very rare to see together. The subjects of each dialogue are different and are, as the title indicates, the main business of the time, and the situation of European countries. Only the first dialogue of the book: the bedroom Innocent XI accounts, do not put in a situation both regular characters, because it is a dialogue between the Pope and Saint-Pierre, the dialogue is nevertheless the fifth pasquinades dialogue. French writer often worn with pamphlets and satire, Eustache le Noble (1643-1711), Baron de Saint-Georges and Tenelière, was imprisoned in the Conciergerie for fraudulent acts, escaped, then was caught again and banished of France for 9 years, he died poor when he was rich. All these dialogues are quite rare and not easily found. A hitch with a bit missing. Good copy. --- Please note that the translation in english is done automatically, we apologize if the formulas are inaccurate. Contact us for any information!