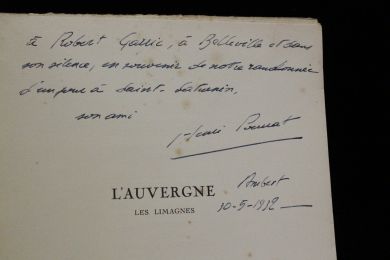 
first edition on the current paper.
Dated and signed autograph dedication of Henry Pourrat to his friend Robert Garric Auvergne: "... in Belleville and its silence in memory of our day hike in Saint-Saturnin, his friend ..."
Catholic reformist, he was the   founder of "social Teams" in 1920, which aimed to establish a social elite and bring the good word about the brotherhood born of the trenches to the workers, in the tradition of patronage. Simone de Beauvoir, then student of Robert Garric in philosophy at Sainte-Marie Institute of Neuilly, remembers him   in his "Memoirs of a Tidy Wench"   "Garric appeared; I forgot everything else and myself; the authority of his voice subdued me. In twenty years we he explained, he had discovered in the trenches the joys of camaraderie that removed social barriers. [...] To deny all limits and all separations, get out of my class, out of my skin: this slogan electrified me. [...] Must serve my life! Must serve all my life! "
Illustrated cover of François Angeli book decorated with 218 heliogravures.
A few bites on the guards, a small tear in foot of the back.