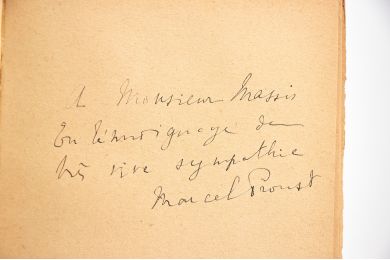 Henri Massis, an attentive reader of Proust's works, devoted two essays to the subject.
In Le Drame de Marcel Proust [The Drama of Marcel Proust], published in 1937, he took a particular interest in Sodom and Gomorrah and puts forward an “audacious and almost Freudian” interpretation of Proust's relationship with sin: “alone with his fear of evil since the loss of his mother…[Proust wrote] to defy to the central idea of the work, that of decline.”
In Chroniques [Chronicles], Paul Morand pays homage elegantly to this study: “Barely a few weeks ago, Henri Massis published…an essay which may one day be to the work of Proust what Claudel's preface is to Rimbaud's; with the difference, at any rate, that Claudel looks on the sinner less with demands than with love. One could really admire the Classical logic with which Henri Massis penetrated into the labyrinthine form of Proustian thinking; his Christian explanation of the soul of the author of Sodom and Gomorrah resembles the cathedral of Saint Thomas at Madras, isolated and out of place in the middle of the jungles of the East.”

The three volumes are presented in a full black morocco case, the spine with blind-ruled compartments, date at foot, the inside lined with khaki sheep, by Goy & Vilaine.
A fine copy, complete in three volumes, of volume V of In Search of Lost Time bearing an autograph inscription from Marcel Proust, well-presented in a lovely case.