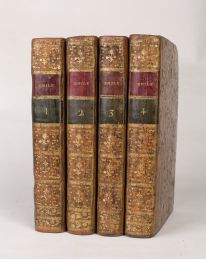 First edition, very rare, with all of the characteristics described by Mac Eachern (Bibliography of the Writings of Jean Jacques Rousseau to 1800, Émile, ou De l'éducation, Voltaire Foundation, 1989): page numbering printing errors (vol. 1: S8 in place of 88, 433 in place of 443, 46 in place of 465; vol. 2: 256 in place of 356 and 257 in place of 357; vol. 3: 363 in place of 383; vol. 4: the tab of the first 3 of 336 is missing), boards highlighted with asterisks (vol. 1: Av and B4; vol. 2: H3 and N6 (wrongly numbered I6)). The very last leaf ends with «FIN» and does not include bunches of grapes (Mac Eachern: «The grapes appear in three different forms.»). It is illustrated with five plates drawn by Charles Eisen, and engraved by Longueil (2), Louis le Grand (2) and Pasquier (1).
Contemporary binding in full granite-patterned calf, decorated spine, title pieces in red morocco and volume numbering in green morocco.
A tiny section of the title piece of volume 3 missing. Spine ends skillfully and delicately restored, the result is almost invisible. Splits on the joints of volume 2. A paper on the back of the first plate fills a tear in the margin. Overall, the paper is very clean, with soiling only on the first title page. All of the half-titles are present when they are often missing.
Engraved ex-libris F. M. Caye.
This 8vo edition of émile is the most rare and sought after. It was the format preferred by the author himself, having invested enormously in the publication of this work. According to Mac Eachern, the question of format caused lively debate between Rousseau and his publisher Duchesne, the latter of the two wanting to offer a 12mo edition as well as a smaller print run of the 8vo because it was more costly. Rousseau, despite his reluctance and thinking that the 8vo would be more sought after, reluctantly accepted Duchesne's plan. The misunderstandings between Rousseau and his publisher put the printing of the work in danger more than once.
Beautiful copy of this rare first edition.