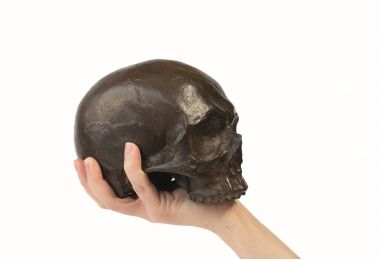 On Friday 2nd December 1814, Donatien Alphonse François, Marquis de Sade died at the Charenton asylum, at the age of 74.
Despite his final wishes, the Marquis had a religious burial in the cemetery at Charenton. In an ironic twist of fate, Sade would not stay in the bosom of the Church for long even after death, for a few years later, his tomb was “profaned” in the name of science by the asylum's doctor, Dr. L. J. Ramon. Having studied the enigmatic Marquis' skull, he passed it on to his German colleague Johann Spurzheim, a student of the famous Franz Joseph Gall, the founder of phrenology, very new and very popular at the time.
Spurzheim made a cast – today in the Anthropological Lab of the Museum of Mankind – of the precious skull and exhibited the original during his European conferences before mislaying it, apparently in Germany or America. What greater freedom could someone who had spent the best years of his life behind bars have hoped for?
The museum also preserves the notes from the very partial phrenological analysis of the “Marquis de Sade's cerebral structure” carried out by Spurzheim's assistant, which was nothing less than a new, posthumous, trial culminating in another guilty verdict, this time without appeal:
“Born from the most shameful passions and marked by feelings of opprobrium and ignominy, a world-view so monstrous – if it were not the brainchild of a lunatic – would render its creator unworthy of being called a man, and would blacken his reputation for good.”
We, however, prefer the more honest description provided by Dr Ramon in his Notes on M. de Sade: “Sade's skull, nonetheless, had not been in my possession many days before I examined it from the phrenological point of view, something I was very taken with at the time (as well as magnetism). What did this examination show me? A well-developed crown (Theosophy, goodwill); marked projection behind and underneath the ears (a conflict point – similarly developed organs in the skull of du Guesclin); mid-sized cerebellum, an elongated distance between one mastoid part of the temporal bone and another (indicating excesses in physical love).
In a word, just as I was unable to discover in Sade, as he walked along seriously and, I would even say, almost in a patrician way, the author of Justine and Juliette, my inspection of his head would have made me absolve him altogether of the charge of producing such works: his skull was in all respects comparable to that of a Church Father.”
A witness to the impenetrable secret of the Marquis and his intolerable freedom, this bronze skull, the only replica of the occiput that so mysteriously disappeared, seems to respond to the Shakespearean question with a sarcastic reformulation:

To be free or not to be!