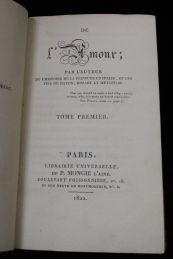 
2 volumes in 1.
The first edition of only 150 copies, rare and very sought-after (Clouzot), of this essay written by Stendhal in Milan after his meeting in 1818 with Mathilde Dembrowski (1790-1825), the woman he loved the most sincerely and whom he never saw again after her departure from Italy in 1821. She features in the work under the name of Léonore.
Contemporary half caramel calf over speckled paper boards, restored. Re-backed to match original, the spine with gilt and blindstamped fillets, marbled pastedowns and endpapers.
Lacking final leaf with printed titles to cut out.
An important copy, presented by Stendhal to Paul-Émile Daurand Forgues (known as ‘Old Nick’, 1813-1883). His son, Eugène Daurand-Forgues, added a note on one of the endpapers (along with his ex libris): “This copy is the one mentioned in the letter from Beyle to E.D. Forgues on the 29th January 1842.” In this letter, Stendhal wrote: “The paper will be less horrid once you’ve had the volumes bound and knocked them about a bit. My indifference to my share made me hand in the manuscript and not worry about the quality of the paper. I’m afraid M. Buloz won’t get rid of the printer – they told me three years ago he was jealous.” It is easy to be surprised by the author’s remarks on the quality of the paper, since the book was printed on vergé. Along with this letter, sent two months before his death to his friend Paul-Émile Daurand Forgues, Stendhal sent – as a sort of testament - the present copy of De l’Amour [On love].  The letter is published in la Pléiade’s edition of Stendhal’s Correspondance III, pp. 514-515 ; see also Lucien Pinvert, Un ami de Stendhal, le critique E. D. Forgues, Paris, Leclerc, 1915, pp. 19-20.
Stendhal and Daurand Forgues met at the Cercle des Arts, established in 1836 by Prosper Mérimée and his friends. In charge of the literature section of the liberal newspaper Le Commerce under the pseudonym of Old Nick, the young critic supported Stendhal’s novels and the two men became friends. The writer also presented him with an inscribed copy of La Chartreuse de Parme.
A very attractive copy with a remarkable provenance.