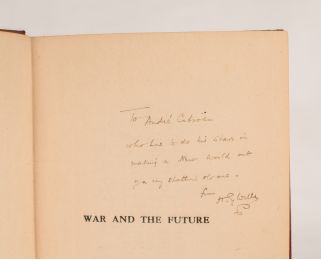 War and the future. Italy, France, Britain at war


Herbert George WELLS
War and the Future. Italy, France, Britain at War
Cassell and Company | London-New York-Toronto-Melbourne 1917 | 13.5 x 20.5 cm | publisher's binding
Second issue, printed in March-April 1917, one month after the first edition published in February of the same year.
Publisher's red cloth. Exceptional inscribed copy signed by H.G. Wells to André Citroën: “To André Citröen who has to do his share in making a new world out of a very shattered old one. From H. G. Wells.”
The inscription echoes the chapter of the book entitled New arms for old ones, in which Wells describes the armament factory created by Citroën to remedy the French artillery weakness. Reconverted at the end of the war, the factory will become the first Citroën automobile manufacturer.
A superb testimony to the early friendship between the industrialist André Citroën and the writer H.G. Wells, who in this very work, dedicates a chapter to the new ammunition factory devised by Citroën, as well as to the social progress he brings to his some thirteen thousand “munitionnettes.”
War and the Future, a work of propaganda written at the heart of the First World War, brings together diverse observations on the on-going conflict, highlighting the radical change that the new armament technologies are bringing to the art of warfare. Wells states his theory of a new world scientific and technical order, which already ran through his science-fiction masterpieces at the end of the last century (War of the Worlds, The Time Machine).
As for Citroën, having understood the crucial importance of the artillery in modern warfare, he made a bet in 1915 to compete with the power of the Krupp armament factories. Abandoning his automobile factory project during the war, he build, at his own cost, an immense industrial complex on the Quai de Javel, which produced 23 million shells for the allied forces.
War and the Future bears the marks of Wells' admiration for Citroën, whom he met the year before during his tour of Europe for the writing of this book: “He is a compact, active man in dark clothes and a bowler hat, with a pencil and a notebook conveniently at hand. He talked to me in carefully easy French, and watched my face with an intelligent eye through his pince-nez for the signs of comprehension” (page 141).
The writer contrasted the immobility of the Front, which he visited in 1916, to the incredible dynamism of the Citroën factory, a veritable temple of modern industry, which he describes as “The busy sheds of Paris struck me as being the most living and active things in the entire war machine” (page 139).
These few hours spent with this pioneer of military engineering had a considerable impact on the writer, who saw him as an innovator, speeding up the construction of the modern world. As the war ended, Citroën brought an end to the production of weapons and founded the famous Citroën company, making the factory his first automobile manufacturer. As with other personalities such as Joséphine Baker or Rudolph Valentino, H. G. Wells became a regular customer of Citroën cars and remained a fervent admirer of the genius that was its founder.
Produced at the start of the 20th century, Wells' superb handwritten dedication to Citroën on the work that celebrates his visionary talents, testifies to the admiration of a man who dreamed of the future for those who made it happen.