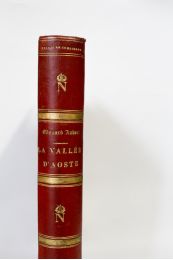 
Amyot, Paris 1860, 11.5 x 18.5 cm, bound
First edition published the same year the Aosta Valley became part of Italy. The work is illustrated with 97 wood engravings in the text, 33 steel insert engravings, 6 chromotypographies and a map.
Bound in half red shagreen, spine decorated with blind tooling, “Palais de Compiègne” gold stamped at the head of the spine, Napoleon III's monogram gold stamped on the spine, marbled paper boards, marbled endpapers, contemporary binding. Some minor foxing.
"Bibliothèque de la Couronne - Compiègne” stamp on the title page. Our copy, unlike those placed in the national collection when the Palais de Compiègne library disbanded, does not have the “dépôt de l'État 1891” stamp. The Palais de Compiègne library, entirely refurnished by Napoleon III, was a truly sociable venue for the emperor's guests who borrowed novels, magazines and newspapers. An entertaining hand-written loan register has been digitized by the National Library of France.
After the fall of the Second Empire, the third Republic allowed the library, which was then open to the Compiègne public, to remain for sometime, according to the memories of Jules Troubat, the former Sainte-Beuve secretary and the last librarian at the Palais. The decree of 16 January 1888 ordered the library to be permanently closed and emptied of its contents. One part of the collection - around 10,000 works - are given to the Compiègne municipal library in 1891. In March 1918, the town of Compiègne was bombed and evacuated; the books were then left open to the elements. It was not until the end of May 1918 that a librarian acting with the army evacuated the works that remained intact, but was unable to deal with the books that had suffered damage. This part of the collection will later be sorted and sold by weight.
We have only been able to find one work from the Palais de Compiègne library on public sale, a Description of Egypt auctioned in 2014.

Beautiful and rare copy, of renowned provenance, with Napoleon III's monogram and one of the rare works to have not made it to the national collection when the Palais de Compiègne library was dismantled in 1891.