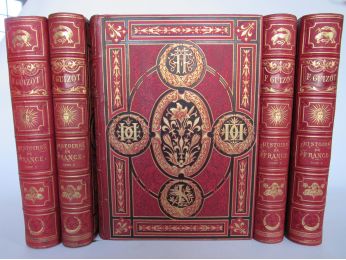 
Edition illustrated with 75 inset wood for Volume 1, Volume 2 66, 74 volume 3, 94 Volume 4, and 85 volume 5, all designed by Alphonse de Neuville, Philipoteaux .. . the fifth book was written by madame de Witt, the author's daughter, according to the notes left by one. Some cards colors.
Cardboard editor Magnier Charles signed tail, red and gold. Half red shagreen percaline dish. Back with false nerves decorated with four emblems of French royalty: the salamander, sun, dolphins and a crescent moon. boards decorated with a large red and gold plaque bearing in medallions figures of several kings on red background of foliage. shimmering white guards. Only the upper and lower flat of the first volume bears some gilding shortages in low margin and angular lilies otherwise magnificent example, in superb condition, perfectly fresh, well white paper pristine. Note that the fifth volume is subsequently appeared in a bright red and vermilion.