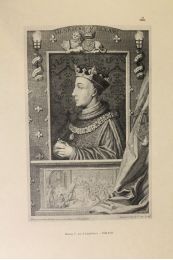 
First Edition printed 250 copies numbered and signed by Fernand Lennel, ours one of 50 Japan, leading print.
Bindings in full brown chocolate morocco, back discolored with five nerves, golden dates tail, flat struck at the top left of the golden coat of arms of the city of Calais, name of the author and title of the work minted on the first boardes of volumes, marginally discolored boards, guards and contreplats of marbled paper, framing of a golden lace on the contreplats, guards following paper to the vat, preserved covers (except for the second board of the third and last pamphlet), some dull corners, golden heads.
The book, illustrated with 372 plates inset, is composed as follows: 3 pamphlets bound in one volume and two albums of illustrations, the first "Origins at the end of the reign of Louis XIV" and the second " From the end of the reign of Louis XIV to the present day ".
Some joints restored in heads, a brown spot at the head of the back of the second volume, an inner hinge split on the second volume.
Rare book in head print, complete in three fascicles of text and two albums of boards, connected to the arms of the city of Calais.