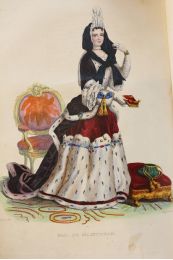 
Edition offering more than 170 biographies of illustrious characters from the History of France, each of them enriched with an out-of-text portrait enhanced in color.
Bindings in half shagreen navy blue, back with four nerves decorated with gilded nets, small traces of friction on certain backs, plates of marbled paper, guards and counterplates of paper in the tank, some blunt corners, bindings of the time.
The author, Edward Mennechet (1794-1845), was Louis XVIII drive and Charles X. The work appears in the years following the abdication of the latter, under the reign of Louis-Philippe I, and seeks to establish, at the heart of a contemporary of socio-political crisis, the legitimacy of the history of France through those who made it: "The glory of a country is not only in the great things it performs, it is still in the great men it produces ”.
-The first volume concerns the Middle Ages and draws 31 portraits, from Clovis to Charles V.
-The second volume, dedicated to the XIV, XV and XVI centuries features 30 biographies of Calvin Froissart.
-The third volume, composed of 29 texts, focuses on the XVI and XVII th centuries, from Philibert Delorme to Mazarin.
-The fourth work, entitled "Century of Louis XIV", extends from Pierre Corneille to Fénelon in 32 portraits.
-The fifth volume, corresponding to the eighteenth century, stands 29 portraits of Villars Beaumarchais.
-Finally, the sixth and last volume deals with the Revolution and the Empire in 31 texts, from Bernardin de Saint-Pierre to Eugène de Beauharnais.

Reference texts in a binding signed Antoine Chatelin, retracing over 1300 years (from 465 to 1824) a history of France through its great national figures.