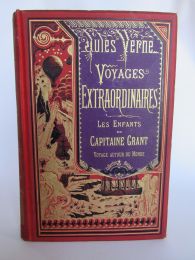 
Illustrated edition of 172 vignettes by Riou, Engraved by Pannemaker. In fine catalog for 1890.
Cardboard said the Editor "banner" on purple garnet red. Beveled flat type 7. Plate 7 types appeared in 1885 and which is characterized by the disappearance of the flutes as the author at the top of the banner, and by changing the name of the editor, which becomes Hetzel Collection and no longer Collection J. Hetzel. lower flat variant of the type Lenègre e. signed Souze plate, signed Binding Lenègre tail.
Belle top plate, with good shiny gold. Back insolated, but present golds. 3 corners bumped. soft headdresses and collapsed with micro cut tail.
One of the great classics of the author, two children in search of their shipwrecked father, who led the Scotland player in New Zealand via the Canary Islands, Cape Verde, the Strait of Magellan , the Andes, the Argentine pampas, the Cape of Good Hope, Amsterdam island, and Australia.