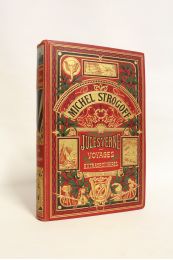 
New edition, illustrated with drawings by Ferat, engraved by Brabant and 6 inserts in color, and 2 cards. A portrait of Jules Verne on the frontispiece.
Editor cartonnage "to an elephant, title in the fan" signed at the bottom of the plate Engel, back to the lighthouse, second board type "i" according to Jauzac.
Headdresses, corners and joints slightly rubbed. Guards a little thin in margins as usual.
An ex-dono with the feather of the time at the head of the first blue guard.
Michael Strogoff is a historical adventure novel about the journey of his eponymous character, the letter of Russian Tsar Alexander II, from Moscow to Irkutsk, capital of eastern Siberia. His mission is to warn the Tsar's brother, who had not heard from Moscow, of the arrival of the Tartar hordes led by the traitor Ivan Ogareff to invade Siberia.
Good copy.