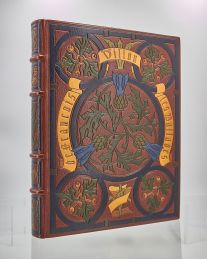 Edition illustrated with drawings by Auguste Gérardin engraved by Jean Tinayre printed with 350 copies, ours is one of the 25 copies on vieux japon paper, reimposed 4to, enriched with a signed original watercolour, with a double suite of signed artist's proofs, on japon mince and on chine paper.

Bound in full brown morocco, spine in four mosaic compartments with black morocco frames and plant motifs in pine green, light green and brown morocco, boards richly mosaiced with strips of morocco in the same tones, pastedown endpapers lined with morocco inlaid with multiple mosaic frames and enhanced with gold, iridescent fabric endpapers, the following of comb-patterned paper, blind tooling on the leading edges and the spine-end, all edge gilt on wide margin. Chemise in half brown morocco with stripes and patterned paper and a slipcase of the same paper, lined with brown morocco and comb-patterned paper.
Superb set signed by Marius Michel.

Provenance: Louis Barthou's library with its ex-libris drawn and engraved by Boutet de Monvel glued on one of the endpapers.

Wonderful copy set in a spectacular binding by Marius Michel, one of the great masters of French binding.