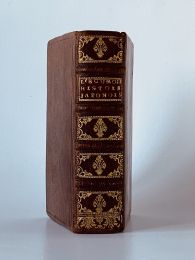 
Dutch counterfeiting of the illustrated edition of 1743 to Pekin, the first edition of the only text dating back to 1734. A frontispiece repeated in the 2 volumes (the Chinese emperor and his court with monkeys in trees). Title pages in red and black.
Bindings in full calfskin from the icy era. Smooth decorated backs. Title and number pieces in red morocco. Capes of volume II leveled; 2 corners eliminated.
This licentious and erotic tale, which sails on the fashion of marvelous Orientalism, gained a great success as of its publication, although it caused scandal and that the author was accused of obscenity, irreligion; some even saw in it a criticism of the bull Unigenitus (against Jansenism) and of Cardinal de Rohan, and Crébillon found himself imprisoned following his accusations. Tansaï is a fairytale and political tale, the strangeness of the intrigue always surprises the reader, the whole story revolving around a gold skimmer with a huge handle ... Indeed, fictional inventiveness is displayed without restraint in this work by Crébillon fils, she had Voltaire write in 1735: "I know nothing so crazy as this book. If I did, I would be burned. ”