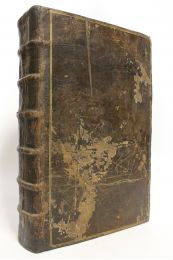 
The first edition of Amyot's translation dates back to 1572 in Vascosan Michel in Paris. Full contemporary calf, spine nerves 6, 6 jewels, double fillet border on covers. Jacques Amyot (1513-1594), was the tutor of the son of Henry II (future Charles IX and Henri III), it is also a professor at the University of Bourges and become great chaplain of France and bishop of Auxerre he will be important center of humanism. It is under the recommendation of Francis I that result Lives of illustrious men of Plutarch. Thereof, and thereafter the moral works had and will have a significant impact, not only for the rediscovery of antiquity (which thus had a greater impact than some scholars) and Plutarch but for the French language itself same. Montaigne wrote: "We, ignorant, were lost if we had this book surveys the mess ... This is our breviary. But not only skillful translator concerned about accuracy, it is also a very clever popularizer rather than a scholar, as he wrote to a wider audience and not for scholars, as he explains, he says that it is necessary to clarify, it looks pure French, away from hellénismes and tour pedants, a French to be praised by all specialists of the French language in the seventeenth as Vaugelas. Finally he brought the translation into a new era. Brunet, IV, 738. Restorations skilled at corners, edges and caps. --- Please note that the translation in english is done automatically, we apologize if the formulas are inaccurate. Contact us for any information!