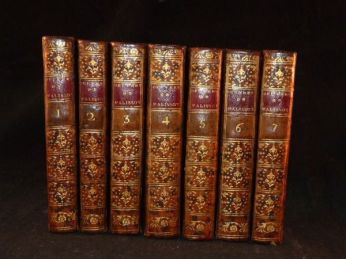 
New Edition, the most complete, according to published at Liege in 1777 Plomteux Full speckled calf blond vintage edition. Back smooth decorated with parts of title and volume numbers of red and green morocco, caissons and gold jewels. Casters on cuts and caps. All marbled. Some tiny gaps discreetly restored to the jaws. The first two volumes contain the theater, the third poetic pieces, the fourth a memoir of literary history from Francis, the fifth a history of the first centuries of Rome and the last two a mixture of various parts. Although it can not truthfully be described as important literary production Palissot, it was undoubtedly a major figure in the literary life of his time; and the various parts, notes, comments, letters that frame every comedy is remarkable about the literary life of the second half of XVIII, including with respect to the famous quarrel between the philosophers whose Palissot was originally attacking outrageously in his eponymous play (probably poorly designed to dramaturgical perspective, but excellent in his writing, each making mockery fly). We identify for tastefully criticism from his contemporaries on his own pieces. Palissot was probably an upstart, with incredible for controversy and ridicule talent, and as much for flattery; this edition of his work retains the greatest interest in the world of letters of the second half of the eighteenth. Bookplate libraries A. G. du Plessis and P. of Morandière. --- Please note that the translation in english is done automatically, we apologize if the formulas are inaccurate. Contact us for any information!