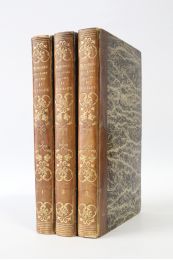 
Illustrated edition of 11 original etchings by Eugène Béjot, one of 300 numbered copies on laid Arches paper, only one print after 25 imperial Japan, variously enriched.
Bindings in fawn half sheepskin, smooth backs adorned with golden romantic arabesques, small losses and slight friction in the back tails, joints slightly split in heads and in tails, marbled paper boards, guards and counterplates of paper in the tank, speckled edges , bindings of the time.
Some foxinges.
Illustrated book of three frontispiece portraits and 6 autographed facsimiles.
Our copy is enriched with a handwritten autograph letter dated February 15 (1826) from ARP Allysan de Chazet in which he reminds his correspondent, a high official, who has not yet "this unhappy Madame d'Anthenay, his payment advice for the year 1826 ... "for which he is confused in praise:" ... I hasten to remind you that it is impossible to find a more interesting woman, in terms of misfortune, principles and character ... "