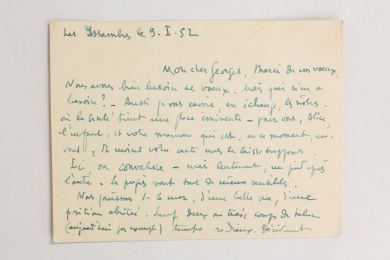 
Signed autograph letter of two pages, dated June 10, 1975 and written from Nice, Henri Bosco to his friend the art critic Henri Raillard and his wife Alice.
Henri Bosco was the godfather of Henri Raillard, one of Georges and Alice Raillard's three children.
A trace of central fold.
At first, Henri Bosco philosophizes on the beneficial virtues of travel: "Leaving is good, it is reviving a little - or a lot, depending on what one discovers in oneself along the way ..." and deplores nostalgically no longer "able" to travel: "As for me, I left - left very young - at 17, and do not regret it.I would do it again if I became young again, but I do not become again ... I the rest a little bit. "
He also regrets not receiving his friend Georges and his wife Alice more often at home, and shows him all his friendship by telling him that he will take good care of Georges's mother during his stay in Brazil: "But we will console your mother by reciting to her "Lusiades" in Portuguese. "
The evocation of this fundamental and unifying work of Portuguese culture allows Henri Bosco to deliver his impressions on Portuguese : "This language that we say beautiful has remained incomprehensible to me ... It is claimed - very unfairly, I suppose - that she is to the Spaniard what the Auvergnat is to French.Hear her quickly to shed light on the subject.
After joking about his notoriety : "Work too, Celebrate my genius, there is plenty to do", he advises and recommends to his friend some curiosities of Brazil as he also asks him to inform him of his peregrinations : "Hold We will keep you informed of your actions Note, note: You will make chronicles and volumes "The images of a young couple in Brazil, at the atomic time" ... "Also note that (after Charles Picard There are almost intact indigenous civilizations in the arms of the river, which no one has ever searched. Go see that. Attention to health! "..." Visit the Don Bosco Institutions for me ... Take a friendly look at the Alliances françaises. "
Envelope attached.