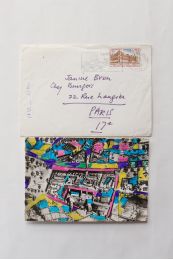 
After many years spent in Greece, Egypt and Rhodes, travel writer Lawrence Durrell was forced to flee Cyprus following popular uprisings that led the island to independence. With only a shirt and a typewriter, but with the success of his Bitter Lemons novels, he arrived in France in 1956 and settled in the Languedoc village of Sommières. In the "house Tartès", his large house surrounded by trees, he wrote the second part of his work, his monumental Quintet of Avignon, gave himself to painting and received his illustrious friends, whose couple Henry Miller and Anaïs Nin, the violinist Yehudi Menuhin, the London publisher Alan G. Thomas, and his two daughters Penelope and Sappho.
Among the olive trees and under the Mediterranean sun, he meets there in the middle of the 1960s the young and sparkling "Jany" (Janine Brun), Montpellier of thirty years with the ravaging beauty, who worked in the department of the Antiquities of the Sorbonne in Paris. She was named "Buttons" in memory of their first meeting, where the girl wore a dress covered with buttons. Henry Miller also fell under the spell of "Buttons", praising his beauty and his eternal youth in exceptional letters unpublished. The three friends spent memorable Parisian evenings, of which we keep precious autograph traces on a restaurant menu and through their epistolary exchanges. Recommended by Durrell, she made many trips including to England where she received a wide correspondence from the writer and original works of art signed by his pseudonym artist, Oscar Epfs.

Unpublished autographed postcard signed Lawrence Durrell from Corfu to his young French lover Janine Brun, named "Buttons". 15 lines with multicolored markers, signed LD
The card carries a photograph on the back of his beloved island of Corfu, which accueilla Durrell during his youth from 1935 to 1941, and inspired his famous novel The Black Book (The Black Book, 1938).

"Buttons darling, with your little hole in business card you will arrive at the end of the world I'm sure - You'll win the jackpot, woman intact without tacte
Much love
LD. "

The card was sent to a young lover of the author, who, in Sommières as in Paris, enlivened his solitary days at the end of the sixties and seventies. Janine Brun, also nicknamed "Buttons" in the writer's letters and postcards, was described by Durrell biographer Ian McNiven: " She was almost thirty-two-year-old, with a girl's small-breasted figure, as dark-haired as Claude Kiefer was blond, and not languorous but tremendously energetic "(" She was almost thirty but looked much younger, with a girl silhouette with small breasts, as dark as Claude Kiefer [another her lovers, wife of a Swiss surgeon] was blonde, not so languorous as extremely energetic ", ( Lawrence Durrell: A Biography , page 591).
Durrell addresses this charming and facetious map from Corfu, which he rediscovers in the summer of 1969 after many years of absence. In the company of his brother and his wife who share the same hotel, he is about to shoot the film adaptation of his brother's book, The Garden of the Gods, on the famous stay of the Durrell family in Corfu over the years. 1930. He starts and finishes the missive with funny traits: " Oh Buttons, you're funny!" I have your picture on a shelf next to another gentleman "I am moved for him and for myself ". The young woman claimed indeed her independence and her freedom, as Durrell remarks a little bitterly a few lines further: " I miss you a little but now I received my lesson - so be it ". Having not been able to make her a lasting and loving companion, he will be satisfied with the carnal pleasures that he shares with her in the heat of the South or in the Parisian hotel rooms: " Buttons darling, with your little hole in map You will arrive at the end of the world I'm sure - You'll win the jackpot, untouched woman ".

Their relationship lasted until the late 1970s, with Jani / Buttons appearing occasionally in Durrell's works (including the poem "Vaumort").   Collected Poems: 1931-1974) and in the writer's famous correspondence with Henry Miller: " that little demon Buttons [...] turned up for a New Year TRINC and stayed with me finally, in my eternal little Room 13 at the Royal "(" Buttons this little demon arrived to drink to the New Year and finally spent the night with me, in my eternal small room of the Royal, "letter from Durrell Miller, January 6, 1979). She also received letters and postcards full of solicitude, intimate allusions and reading tips from Durrell and her great friend Henry Miller, as well as original works of art by Lawrence Durrell himself.