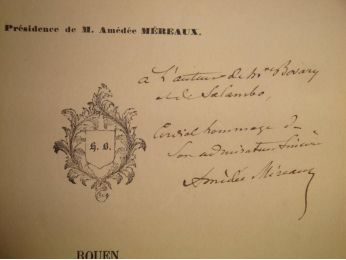 
First Edition. Very rare copy from the library of Gustave Flaubert, under the reference number 22 in the sale of the estate of Mrs. Franklin Grout Flaubert November 18, 1931 beautiful autograph dedication of the author autograph. "To the author of Madame Bovary and Salaambo Cordial tribute to his admirer. " Small tear and small spot without gravity affecting a slice. Small repaired tear in foot back without missing. Famous composer and musician Jean-Amédée Lefroid of Méreaux (1802-1874) was a pupil of Reicha and pianist Duke of Bordeaux, virtuoso Paris, London, Rouen (where he died) and musicologist. Read about the beautiful tribute biography of Marmontel: "... In 1832, he executed several times with a pair of Chopin's composition to pre Clerics (...) In 1835, Méreaux renounced his eventful life . virtuoso bind to Rouen, where he quickly won universal sympathy (...) admitted to the Académie des Sciences, Belles-Lettres et Arts of Rouen, in 1858, he was named president of the Society in 1865, this honor very rarely awarded to a musician, was a double tribute to nature as to scholarship of the artist. (...) The interior [of the Legion of Honor] of this learned composer, this eminent critic , this erudite scholar, who was both president of the Academy of Sciences, Belles-Lettres et Arts of Rouen and vice president of scientific and archaeological conference held in Rouen under the chairmanship of M. de Caumont, decoration Méreaux, I say, was greeted with enthusiasm in the city of adoption of this distinguished artist. A banquet was offered to him in which took friends, students Amedee Méreaux, artistic and literary notables, among which we mention MM . Clogenson, Honorary Advisor, Bouilhet, Gustave Flaubert, Lucien Dautresme Charles Vervoitte. (...) The name of Amédée Méreaux remain among those teachers whose whole life is a noble example and teaching. "(Marmontel). Highly sought after, the works of Flaubert library is a badge rarity. --- Please note that the translation in english is done automatically, we apologize if the formulas are inaccurate. Contact us for any information!