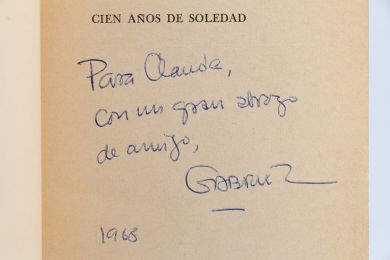 Second edition only one month after the first edition.
Spine lightly wrinkled, small signs of folding in the margins of the boards, a light mark on the second board.

Rare and precious handwritten inscription signed by Gabriel García Márquez on his masterpiece to his friend and translator Claude Couffon: “Para Claude, con un gran abrazo de amigo, Gabriel 1968.” “For Claude, with a big hug from your friend, Gabriel 1968.” Claude Couffon, a specialist and translator of the major Spanish-speaking writers of the second half of the 20th Century, translates Chronique d'une mort annoncée a few years later.

On the last page, below the colophon, Gabriel García Márquez specified an address in Barcelona, that of his famous literary agent for Spain: “c/o Agencia Carmen Ballcells Urgel 241, Barcelona, 11.”
Rightly considered as one of the most important Spanish language works, the novel by García Márquez, however, had difficult beginnings, after a first refusal by the avant-garde Barcelona publisher Seix Barral, who considered that: “This novel will not be successful […], this novel is useless.” García Márquez sent it from Mexico to the Argentinian publisher Francisco Porrúa, who immediately perceived the power of this unknown Colombian writer: “It wasn't a question of getting to the end to find out if the novel could be published. The publication was already decided from the first line, in the first paragraph. I simply understood what any sensible publisher would have understood: that it was an exceptional work.”
Finished printing in May 1967, One Hundred Years of Solitude appeared in bookshops in June with 8,000 copies selling out in a few days. The second print on 30 June will have the same success, as will the editions that follow week after week. More than half a million copies will be sold in three years.

Several copies were later inscribed by Gabriel García Márquez, who over the years has become one of the most famous South American writers, translated into 25 languages. However, contemporary handwritten inscriptions on the first prints are extremely rare, even more so to one of his French translators who will contribute largely to his international renown.