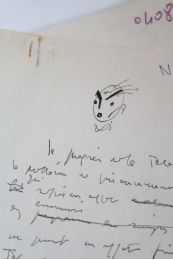 Remarkable autograph manuscript text by Saint-Exupéry, probably written during his exile in New York at the end of the 1930s or early 1940s, decorated with a face and two small figures prefiguring the Little Prince as well as a discreet sketch of a woman's face.

Saint-Exupéry predicts in a few pages the future of television and invents a license fee system that was not to be instituted in France until 1949, showing a real prescience of the glorious future of this new medium. The visionary writer, in search of progress and innovation, was fascinated by machines that cut through the sky but also by televisions, which progressively began to appear in French living rooms.
Written on his favorite paper, translucent watermarked “Gilbert Dispatch Bond” paper, this manuscript begins with a drawing of a child's oval face, with arched eyebrows, a cross between a self-portrait and the future face of the Little Prince. Saint-Exupéry has reproduced twice the figure of a little person on the following page, a silhouette at the foot of the sheet, a figure from the years of the graphic genesis of the Little Prince, which was frequently present in the margins of his writings, letters, and notebooks. The two figures are wearing large trousers similar to the watercolors of the Little Prince published in the first edition of 1943. They frame the sketch of a female face; one can pick out the curve of the nose and the large, almond-shaped eyes.

As well as his drawings, the author also put down hundreds of other ideas during these years: aeronautical research, political ideas, attempts at novels, preparatory patent applications, mathematical calculations, scientific thoughts, and so on. Saint-Exupéry here shows himself particularly preoccupied with the quality of television programs, which at the end of the 1930s were very much in their infancy, being broadcast to only a few hundred private sets.
“The progress of commercial television is being held back by the financing of broadcasts. Adverts, which can cover the costs of radio broadcasts cannot, in fact, finance television programs, only those of relatively poor quality...The ideal solution would require users to pay a fee for each program...The user would pay a levy proportionate to the duration of use and the program selected.”
License fees had only existed since 1933 and only applied to wireless sets to cover the costs of the Post Office. Short interviews, cinema news and audiovisual documentaries left a lot to be desired: the writer here develops, across four pages of close text, the means of improving the potential of this extraordinary machine still so underexploited.

Since Night Flight and Wind, Sand, and Stars, Saint-Exupéry had embraced progress and integrated the development of technology into his own literary works. Some of his fantastic inventions would see the light of day in the first versions of The Little Prince, like the machine for teleporting and smoking cigarettes, a multi-use invention which reminds one of Boris Vian's “pianocktail”. Among his scribbles that would later become real scientific inventions, there are photovoltaic cells and genetic code. As an aviator, he filed ten patents from 1934 on, the first for a landing system using sound waves.
The writer and inventor with the fertile imagination here gives us one of his inspired ideas enriched with three intermediary versions of the Little Prince which several years later would go on to become one of the most famous figures in literature. This manuscript bears witness to his spirit carried to the heights of his eclecticism, which like at the time of the beginnings of airmail, constantly tried to master the technology: “we are all young barbarians still entranced by our new toys,” he wrote in Wind, Sand, and Stars.