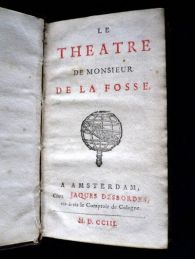 
Artificial collection consists of 5 rooms (separate pagination) of the pit illustrated frontispiece by Van of 5 Aveele published by Desbordes between 1798 and 1702. General title in red and black. Polixene. 1698. Theseus. 1702. Manlius Capitolinus (same date as the original). 1698. Gabinie. 1700.'s Distracted. 1698. Full contemporary calf, spine tooled raised. 'It was not until the age of forty-three years to put Lafosse Polixene theater, his first tragedy. This book was a great success for seventeen performances. Mr. Dauphin, assistant to the second, was so happy with the acting, he made them give a hundred louis. Two years after Polixenes appeared MANLIUS Capitolinus, represented for the first time January 18, 1698. Then this tragedy was a great success, and today still holds a leading position in the directory of French theater after masterpieces the great masters. Theseus, tragedy, despite the criticism to which it gave rise, has long been the theater, given for the first time January 5, 1700, she had three and twenty performances. The sixth stage of the fifth act produced a great effect. Coresus AND CALIRRHOE fourth and final tragedy Lafosse, was much less successful than others. Played for the first time December 9, 1703, she received a small number of performances, and has not been taken. Lafosse was still at the Duke d'Aumont when death took himself to letters, November 2, 1708, in his fifty sixth year. (English playwrights). QUERARD, III, 420. --- Please note that the translation in english is done automatically, we apologize if the formulas are inaccurate. Contact us for any information!