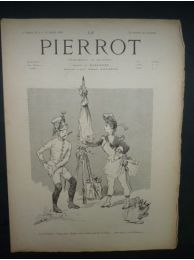 
WILLETTE, Adolphe & OTHERS
Le Pierrot
Paris 1888 and 1889, 29 x 40 cm, unbound.
First edition.
An almost complete set of this rare satirical literary journal headed and illustrated by Adolphe Willette.
49 issues from 6 July 1888 to 20 September 1889, each comprising two folio leaves, the first page with a lithograph by Willette, some with caricatures on page three.
With Emile Goudeau as its editor-in-chief, this journal, nominally published on Fridays (though not always actually published then) includes poetry, ads, and news in brief, but its real value lies in the illustrations, done exclusively for it by Willette.
A little light foxing and small tears to margin not touching images or text.
Adolphe Willette was an inseparable part of Montmartre, where he was responsible for the decoration of a number of cabarets, bistrots and the famous Moulin Rouge. A painter first and foremost, he exhibited at the Chat Noir, having helped to found it. He later worked with a number of newspapers, including le Rire and l’Assiette au beurre, before establishing le Pierrot.
A divisive figure, he stood as an Anti-Semitic candidate in the municipal elections in Paris in 1889. He proclaimed himself first President of the Republic of Montmartre, a philanthropic association aimed at helping the children of that quartier.