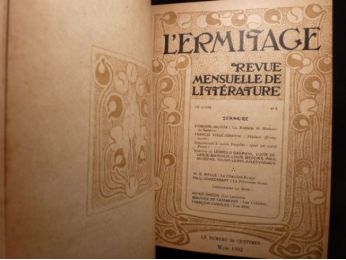 
Originale.binding Edition Editor at bradel half dark green calico, smooth back, as part of black morocco, small gilded iron and double gold mesh queue.Douze January to December 1902. Hedges numbers conservées.Chaque number is illustrated with a literary xylographie.Contributions Blum ("The eyes I love"), Paul Fort, Henri Ghéon, André Gide ("Oscar Wilde"), Ms. Alphonse Daudet, Walt Whitman, founded in etc.Publication 1890 by Henri Mazel, the Hermitage is a monthly magazine belonging to the first wave of small symbolist journals. In 1895, the magazine between declining and its new director, Edouard Ducoté, uses André Gide. The editorial team is reduced to twelve regular collaborators, friends Gide. After many difficulties and attempts to overhaul the editorial team (Remy de Gourmont to make a pass and will also contribute financially in 1905), Hermitage breathed his last in 1906. L'Ermitage manages to detach other important magazines of the time like the Mercure de France or La Revue blanche because it boasts eclectic and apolitical; on its cover, you can also read that it is "the only journal that deals with politics or sociology [but] that deals only with literature and art." His illustrations are small art nouveau, and, true to his symbolist spirit, employees are more interested in poetry than fiction. Tiphaine Samoyault, French literary critic, believes that the Hermitage expresses a transition straddling the end of the century aesthetics and poetry avant-garde of the 1910s. --- Please note that the translation in english is done automatically, we apologize if the formulas are inaccurate. Contact us for any information!