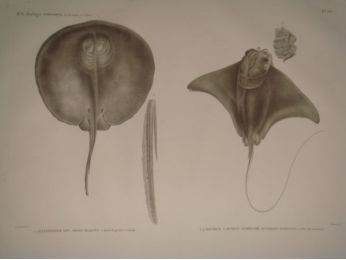 
Original etching in plano, untrimmed, extracted from the 'Imperial Edition' of the Description of Egypt or Series observations and research made in Egypt during the French expedition, published by order of His Majesty the Emperor Napoleon Great. Conducted between 1802 and 1830 and published between 1809 and 1828, she was taken in 1000 copies available to institutions. Laid paper with watermark visible transparence.Légères and marginal foxing or offense against burning ancient and modern Egypt, two small wormholes in upper margin, a small repaired tear in lower margin (1 cm), otherwise excellent condition of freshness and conservation. Plate from the series of Pisces, whose study was carried out by Étienne Geoffroy Saint-Hilaire (1772-1844), French naturalist who took part in the Egyptian campaign, and collected on this occasion many observations on mammals, reptiles and fish in particular. The monumental first edition of the Description of Egypt in 13 volumes contained 892 colored plates of which 72, including 9 volumes involved antiquity. The other volumes dealt with the Natural History and modern Egypt as Napoleon Bonaparte had brought with him a commission of scholars from all disciplines so that, they said, in his description was stored the richest museum of universe. The work was written in part by Baron Dominique Vivant Denon, before he became DG of Napoleon in the Louvre Museum. More than 80 artists and 400 writers were hired for this huge project. The dimensions of the exceptionally large boards necessitated the creation of a special press and a specific piece of furniture to keep them ...! --- Please note that the translation in english is done automatically, we apologize if the formulas are inaccurate. Contact us for any information!