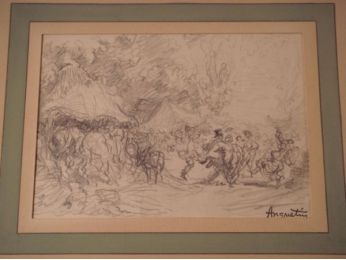 
ANQUETIN Louis
Fête villageoise - étude pour le bal champêtre Pencil on paper, Late 19th - Early 20th century, 22 x 15.5 cm. Original pencil drawing, presented under a two-colour marie-louise frame.
Signed with the artist's signature stamp in the lower right corner of the work, and signed with the workshop's stamp on the back.
A minor tear in the left margin.
Very good condition. Provenance: artist's workshop, referenced in the Atelier Louis Anquetin catalogue (Thierry de Maigret, 28/11/08).
Louis Anquetin, born in Étrépagny in 1861 and died in Paris in 1932, is an important French painter. He began his career alongside avant-garde painters such as Vincent Van Gogh and Henri de Toulouse-Lautrec. He is the inventor, with Émile Bernard, of Cloisonnism. From 1884 to 1893, Louis Anquetin never stopped exploring the new possibilities that the freedom of Impressionism brought to French painting. From 1893, following a long confrontation with the “maîtres d'autrefois” “masters of the past,” he adopted a pictorial bias which would put him on the fringes of the general art movement and distance him from his friends. Dazzled by Baroque art and its creative vigour, he then thought that his childhood friends were taking a path that would lead to the death of painting. He believes in a “peinture parfaite” “perfect painting,” which is embodied in the re-remembering of Michelangelo and Rubens' lessons in particular. His work, therefore, becomes more classic; he advocates the return to the profession, by proposing to reflect on the a priori conditions of any possible form of art in accordance with the rules of perspective and anatomy, as practised by the masters of the 16th and 17th century. Leaving only a few works that can be described as monumental, Anquetin proves to be prolific as a result of his many studies and sketches; he who considered that drawing was “un moyen d'expression tout puissant” “an all powerful means of expression,” the obligatory foundation of all fine art. By working voluntarily in reverse of his time, Louis Anquetin made the existance of an original modern portrayal possible. Through his persistance and his passion for painting, he indeed prevented the path of the great western tradition from being completely sealed.
His works can be admired in many prestigious museums, such as the Musée d'Orsay or the Louvre in Paris, in San Francisco or in Detroit, in the State Hermitage Museum in St Petersburg, in the National Gallery and the Tate in London, etc.