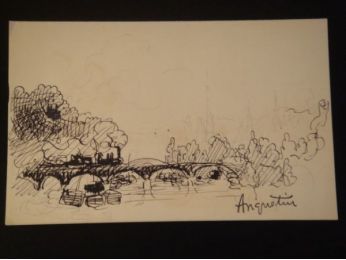 
Original ink drawing and pencil sketch overleaf. Signature stamp of the artist's signature in the lower right corner of the work, and signature stamp of the workshop at the back. Louis Anquetin, through his friendship with the art critic Gustave Geoffroy who was appointed director of the National Manufactures, received three orders for cartons Gobelins, the "Burgundy" in 1911, a carpet "Swans" and in 1912 " Normandy "tapestry. Very nice condition. Provenance: the artist's studio, referenced to catalog Atelier Louis Anquetin (Thierry de Maigret, 28/11/08). Louis Anquetin, Étrépagny born in 1861 and died in Paris in 1932, is an important French painter. He began his career with avant-garde artists such as Vincent van Gogh and Henri de Toulouse-Lautrec. With Émile Bernard, he is the inventor of Cloisonnisme. From 1884 to 1893, Louis Anquetin continues to explore new opportunities introduced by the release of Impressionism in French painting. From 1893, after a long confrontation with the "old masters", he adopts a bias pictorial that will line the general art movement, and take away from his friends. Dazzled by the baroque art and its creative force, so he thinks his childhood friends were involved in a pathway leading to the death of painting. He believes in a "perfect painting" which is embodied in the re-remember the lessons of Michelangelo and Rubens among others. His work becomes more conventional, he advocated a return to business by offering to reflect on the a priori conditions of any possible form of art in accordance with the rules of perspective and anatomy, as practiced by the masters the sixteenth and seventeenth century. Leaving only a few works that can be described as monumental, Anquetin turns prolific with its many studies and sketches, who considered that the design was "a very powerful means of expression" compulsory foundation of all arts plastics. Working voluntarily countdown of his time, Louis Anquetin made possible the existence of an original modern figuration. By his obstinacy and his passion for painting, he has indeed prevented is completely closed the way to the great Western tradition. You can admire his works in many prestigious museums such as the Musée d'Orsay or the Louvre in Paris, San Francisco and Detroit, the Hermitage Museum in St. Petersburg, the National Gallery and the Tate London, etc.. --- Please note that the translation in english is done automatically, we apologize if the formulas are inaccurate. Contact us for any information!