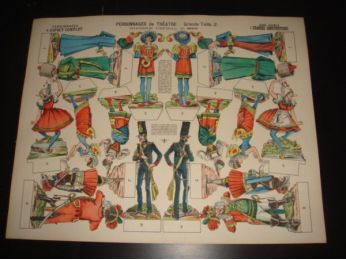 
Image of Epinal, color lithograph, large format, printed on paper fort.Petites stains without consequences on the back, otherwise good condition, colors very well conservées.Ces boards are constructions or cardboard models, on which a pattern was printed. This pattern must be cut and assembled to build various objects or scenes from everyday life. Imaging of Epinal published several series of models which cut the "Broad Constructions" at size 39 x 49 cm, the "Average Constructions" and "Small Buildings". From 1880 to 1908, buildings were published with the object architecture, costumes, boats and other vehicles. During the same contemporary, the paper theaters or "home theater" also enjoyed great success. This toy model developed and lasted until World War II. ly sold by hawkers, images of Epinal their name from Jean-Charles Pellerin, who was the first printer to publish series such images, and who lived in the town of Epinal (Vosges). The subjects are varied but generally revolve around religion, history (French Revolution, battles, military uniforms), or drawn from successful novels. Imaging of Epinal has its roots in the imagery, born in the fifteenth century for mainly illiterate public campaigns folk art. Metz and Nancy are also cities where there are imaging centers with significant production .At behind the image is engraved on a wooden board and printing is carried out using a hand press. It is then colored using stencils. In the nineteenth century, is produced from wood carved moldings lead: stereotypes, which increase production. In 1820, we move to lithography, which induces a radical change of style, finer designs. In 1900, the setting is always color stencil with a machine that can color 300 images per hour, the aquatype. --- Please note that the translation in english is done automatically, we apologize if the formulas are inaccurate. Contact us for any information!