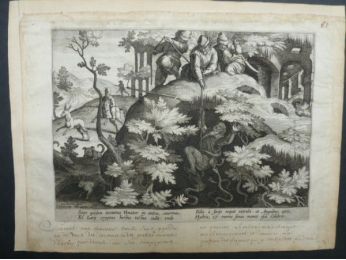 
Authentic original engraving chisel made from a drawing of the sixteenth century Johannes Stradanus. Race on watermarked laid paper, work the late sixteenth or early seventeenth century. Signatures of artists in the board. Latin legend at the bottom of the engraving. Handwritten translation of an ancient writing in the bowl: "Often a hunter falls heedless in caverns or caves covered with grass over where his companions can not remove it, but he unfortunately died and remains the pasture of snakes and hydras are "visible .Filigrane transparence.Les margins by burning were lined with small pieces of old laid paper glued around the edges on the back of them, otherwise good conservation this print very rare.Johannes Stradanus says Giovanni Stradano or Jan van der Straet is a Flemish painter and engraver, born in Bruges in 1523 and died in Florence on February 11 1605 After I started to learn painting from his father, and following the death of the latter, he studied in the studio of Frank Maximiliaan (from 1535-1537) and then in that of Pieter Aertsen in Antwerp (from 1537 to 1540). In 1545, it is a free master in the Antwerp painters' guild. He then begins a journey across Europe: in France, then in Italy, where he lived first in Venice, before settling in Florence. He worked for Cosimo I de 'Medici and working with Giorgio Vasari for the decoration of the Studiolo of Francesco I de' Medici, and that of Clement VII hall of the Palazzo Vecchio. In 1565, he was part of teams of painters and sculptors responsible, under the direction of Giorgio Vasari, to realize the gigantic stage for the entry in Florence Joan of Austria, on the occasion of her marriage to Francis Medici. Greatly influenced by the mannerist, including Michelangelo, Johannes Stradanus contributes to the development of the great history painting to the Italian. He painted several altarpieces for Florentine churches. He also traveled to Rome from 1550 to 1553 and in Naples in 1576 after a trip to Antwerp in 1578, he devoted much of his time to the gravure.Philippe Galle, born in Haarlem in 1537 and died in Antwerp in March 1612 , is a Flemish engraver, a member of a famous family of engravers. He practiced copper engraving, drawing, trade gavures, editing and writing. He trained with Hieronymus Cock in Antwerp, where he engraved drawings of Pieter Bruegel the Elder, including the series of the Seven Deadly Sins. He then became a writer Maarten van Heemskerck. From 1557, he has his own studio, which will be attended by his son, Theodore and Cornelius, as well as his step-son, Adriaen Collaert the Wierix brothers, Hendrick Goltzius, Crispin de Passe the Elder and other Collaert family members. His studio is central to the production of prints Antwerp. Philippe Galle achieved some of its most admirable works on projects of Pieter Bruegel the Elder (The Alchemist, 1558), by Jan van der Straet, Franz Floris (The Daughters of Lot) and Gillis Congnet ( Aenevm Saecvlvm and the four ages of mankind, 1575) .Adrian Collaert, born in Antwerp in 1565 and died in 1618, was part of a large family of engravers. Trained in the workshop of his stepfather Philip Galle, he began by engraving on copper before specializing in the chisel. --- Please note that the translation in english is done automatically, we apologize if the formulas are inaccurate. Contact us for any information!