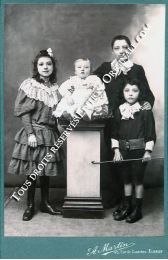 In 1986, at an exhibition of writers’ portraits, he asked that his photo be replaced with a text noting his desire to “appear as little as possible, not for the exaltation of [his] books, but to avoid the presence of an author who pretends to a separate existence.”
A photo taken without his knowledge in the parking lot of a supermarket was the only portrait of the writer until his friend Emmanuel Lévinas made public a few rare photos from their youth.
That Blanchot did not oppose this act, and the fact that it was done by his closest friend, can be explained by what Bident calls “l'espacement de l'inquiétude  [the distancing of worry]”, the outdated nature of the portraits made public carry an echo of the delayed publication of L'Idylle, Le Dernier Mot, L'Arrêt de mort...).

Only a few photographs gathered in the centre pages of the issue of les Cahiers de l'Herne dedicated Maurice Blanchot complement these unique shots of the most secretive writer of the 20 th century.

In his chapter on “L'indisposition du secret [The indisposition of the secret]”, Christophe Bident devotes several pages to the almost complete absence of images of this invisible partner, wondering about the intellectual and psychological motivations of the writer, who was nonetheless aware of the inevitable revelation to come.
“Everything must become public. The secret must be broken. The obscure must enter into the day and make itself clear. That which cannot be said must nonetheless make itself heard. Quidquid latet apparebit, everything that is hidden must appear…” Maurice Blanchot, L'Espace littéraire).