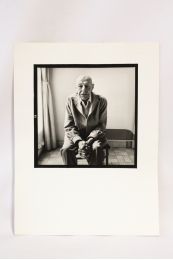 
(DUBUFFET Jean) TRIVIER Marc
Jean Dubuffet. Original photograph By the artist, n. p. 1983, 420 x 420 mm
(16 9/16 x 16 9/16 ”) on Ilford paper 600 x 500 mm
(23 5/8 x 19 11/16 ”), 1 photographic plate
Large original photograph portrait in black and white, made and printed by Marc Trivier. Unsigned silver print, as most of Trivier's works. Unique print from the artist.
“Thirty-five years of photographic practice, obsessions, this is maybe what remains; a singular recording mode of light burning, from one picture to the other, in a series of proposals looking alike, though each one as singular as the fraction of time it refers to” (Marc Trivier).
Marc Trivier takes facial photographs of figures from the eighties. The subject looks right into the lens. These are not portrait star photographs, but they are the result of a will of desacralization:
“Instead of being a writers' or artists' portraitist among many others, he marginalizes himself with his device: under the pretext of settings, he keeps his models waiting, he makes them pose several minutes, which gives them a worn look. Maybe he expects a more natural attitude. Here is Francis Bacon in a delicate balance, Samuel Beckett, Jean Dubuffet or even Michel Foucault, more or less sagged back in their chairs. Intimate pictures.” (“Picture of tiredness at Marc Trivier's”, S. Rousselle-Tellier, in Marges, 2004).
Most of the time photographed in their personal space, the subjects loosen up, no longer mastering their image. The resulting unbalance reveals these figures' frailties and allows Trivier to render the unity of the intimate body and the public artworks.
“I was reading Genet; to me, Genet was letters in a book. And then one day I saw his portrait, and there was like a rupture. How could it be possible that these signs were also somebody? Making a portrait is reuniting the name and the face” (Marc Trivier).
Dubuffet hates the seating position. To him, it is linked to the intellectual, that human too much seated, dead (“too often, the intellectual operates seated: seated at school, seated at a conference, seated at a congress, always seated. Often snoozing. Dead sometimes, seated and dead.” Extract from the L'Art Brut préféré aux arts culturels, Jean Dubuffet, 1940). To him this position cuts out every creativity, it is a “circuit-breaker position” (op. cit). Dubuffet is here somewhat lost in this position. He is not as the artist on the move, making faces but more as a man, tired by this work made while he was standing. “The body collapses under the burden of an immense solitude. As if the works were a mission, a burden too heavy to handle.” (Claire Guillot, Le Face-à-face sans échappatoire du photographe Marc Trivier).