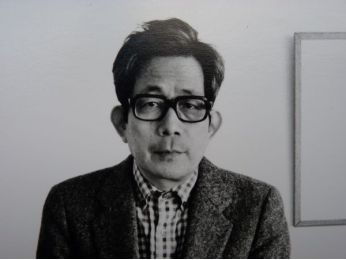 
A pair of original black and white photographic portraits taken and printed by Marc Trivier.
The two photographs are, respectively : - An original photographic portrait of Kenzaburo Oé in 1987, 7 seven years before he became Nobel prize Nobel and two years before he received Europalia prize. - An original photographic portrait of Michel taken in the psychiatric hospital in Liège in 1980. Artists, strangers, madmen, abbatoirs, trees - Marc Trivier photographed each of his subjects with the same interrogative intensity. All his photographs are in the same square format, simple and confined, with no retouching or alteration of the framing, and seem less to show off a subject - famous or unknown, in or out of power, dead or alive - than to seek out a presence.
"What interested me was not simply photographing a body or a face, but the curious situation of someone taking a photo of someone else." In placing his portraits of artists side by side with a divergent pair, Trivier denudes the work of its effect and reveals the enigmatic nakedness of the photographic body. "In his cosmogony every thing, every being - vegetable, mineral or human - deserves the same respect. "In his cosmogony every thing, every being - vegetable, mineral or human - deserves the same respect. For all are subject to the same iron law: solitude" (Luc Desbenoit in Télérama, 05/03/2011, on the occasion of Marc Trivier's retrospective at the Maison Européenne de la Photographie).
Unsigned silver prints, like most of Trivier's work. Unique proofs printed by the artist.

Small stain in the left margin, not touching the photograph of Michel.
An exceedingly rare diptych by one of the great contemporary photographers.