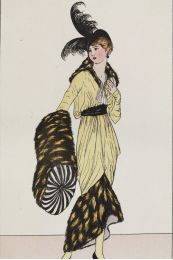 
original print in color, printed on laid paper, signed lower left of the board.
A small purple spot on the right side of the board.
One of the first French fashion magazines, published a few days before the famous Gazette fashionable and bringing together the greatest French artists of the Art Deco movement.
The Journal ladies and modes is a trimensuelle illustrated French fashion magazine created in 1797. Its publication was stopped in 1839 before being taken in June 1912 under the leadership of Tommaso Antongini, secretary, friend and biographer of Gabriele 'Annunzio. It will disappear in August 1914 on the eve of the First World War.
The review was drawn in 1279 copies making it, for the time, a relatively confidential publication. The 186 plates, with great finesse, are engraved on strong paper and colored stencil. They represent the majority of the time, women, but also men and children. The models are not unlike those of the Gazette fashionable whose publication will be launched a few months later, those renowned couturiers but are the fruit of the imagination of the illustrators themselves.
The stencils are mostly executed by George Barbier, but other artists collaborating on the magazine: Léon Bakst, B. Berty, Bernard Boutet de Monvel Roger Broders, Jan van Brock, Umberto Brunelleschi, H. Robert Dammy Etienne Drian, Abel Faivre, Marie-Madeleine Franc-Nohain, Xavier Gosé, Paul Iribe, Kriegck Victor Lhuer, Pierre Legrain, Charles Martin, Fernand Simeon, Ismael Smith, Armand Vallee and Gerda Wegener. Many of these illustrators will also be involved in The Gazette fashionable. Their work, emblematic of the Art Deco movement, emphasize the influence of Orientalism and costumes of the Ballets Russes while registering in the daily activities of affluent French of the time.
From the preface of the first issue of 1912, Anatole France said: "After seventy-five years, he is reborn. He is reborn through the efforts of a few ingenious minds and artists. He is reborn for the curious (if there is) that do not simply modes newspaper fired several thousand and illustrated by photography. And if publishers make us very exactly, in its format, with its paper, printing, its processes of etching and coloring, the old classic patterns of the past is that they intend to continue the pleasantly and become charming classic fashion of today and tomorrow. "